★★★☆☆
French director Mia Hansen-Løve has managed to collate substantial critical goodwill over the course of her short career, thanks in part to the success over her previous film, 2009’s Father of My Child. Hansen-Løve returned earlier this year with the loosely autobiographical Goodbye First Love (2011), a more sedate, at times watery account of the fledgling romance between 15-year-old Camille (rising star Lola Créton) and her slightly older boyfriend Sullivan (Sebastian Urzendowsky).

Beginning in Paris during the winter of 1999, the 19-year-old Sullivan informs his first love Camille that he will shortly be leaving France for the warmer climes of South America, as part of a 10-month long travelling trip. After spending one last halcyon summer together, Sullivan departs and within a few months stops writing to Camille. Four years later, and undertaking a degree in architecture, Camille falls in love with her renowned tutor, Lorenz (Magne-Håvard Brekke). However, when Sullivan re-enters the fray, our female lead finds herself torn between the two most influential men in her life. 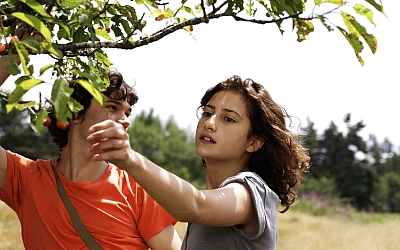 The first half of Goodbye First Love is easily its strongest, painting a vibrant, vivid portrait of two apparent soul-mates intoxicated by the impetuousness of youth. At the tender age of just 15, Camille (delicately played by Créton) talks of her great impending despair at the loss of her lover, the 10-month hiatus too great and too vast to even contemplate without breaking down into tears. Sullivan, conversely, has become disenchanted with his life in Paris, having never truly felt as if he belonged in the French capital – hence his scheduled escape.

However, once Sullivan departs, so does much of our connection with the film. Camille’s own act of ‘escape’ appears highly melodramatic in the context (with little suggestion that there are any other influencing factors – her parent’s amicable divorce aside), and her relationship with Lorenz – perhaps 20 years her senior – is at times downright unnerving. At certain points in Goodbye First Love, Créton almost appears to be revisiting her role as Marie-Catherine in Catherine Breillat’s adaptation of Bluebeard (2009), once again seemingly ensnared by a predatory older lover. We are perhaps meant to assume that their relationship is built around a connection between two minds rather than two bodies, but this never feels truly genuine at any stage.

For all its visual verve and inherent sweetness, Goodbye First Love still feels like a marked back-step for Hansen-Løve after the triumph of Father of My Child. Some heavy-handed scenes of symbolism hardly help matters (Créton spend half of the film submerged in water of some description) and for all its huffing and puffing, by the end of the film Camille’s final decision between Lorenz and Sullivan feels largely academic.

Win a DVD copy of Mia Hansen-Løve’s Goodbye First Love with our brand new competition. Follow the link to enter.