Aardman is back doing what it does best with the tremendously fun and silly The Pirates! In an Adventure with Scientists (2012), a stop-motion claymation adventure set on the high seas, out now on DVD and Blu-ray. Star of the film – the vain, yet lovable Pirate Captain (suitably voiced by Hugh Grant at his most foppish) – is perhaps one of the worst pirates ever to have the notion to sail the ocean, yet despite his ineptitude, is determined to win the prestigious ‘Pirate of the Year’ award.

After boarding Charles ‘Chuck’ Darwin’s (perfectly voiced by David Tennant) famous ship The Beagle, the dim-witted Captain becomes embroiled in a plan to set sail for London to show his beloved dodo ‘Polly’, (which he believes to be a parrot) to the Royal Academy of Scientists and claim his fortune. There is only one problem – Queen Victoria (Imelda Staunton), the extremely volatile monarch with an aggressive anger towards pirates. 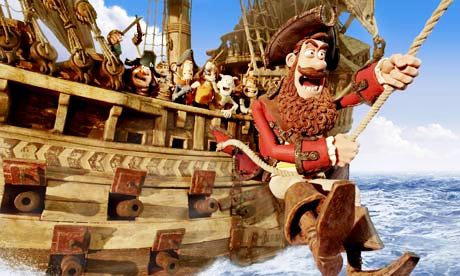 The charm of Peter Lord and Jeff Newitt’s family-friendly flick is undoubtedly found in the return to the tactile clay animation that made Aardman famous. There have been brief forays into the digital world but each has felt distinctly un-Aardman. Thankfully, this time all the elements are back, with wonderful action sequences that capture the charms and ingenuity first shown in the early days of Wallace and Gromit. Pirates’ aesthetic design is a joy to behold, from sunsets across rippling blue seas to the winding streets and wonky buildings of Victorian London.

It isn’t all about the look and feel of the film however, as the impressive voice cast adds to the magic, boasting an incredible array of actors even in secondary roles. These include Salma Hayek as the curvaceous Cutlass Liz and Brian Blessed as the Pirate King, a booming Elvis-a-like with a full-on piratical beard. Each voice adds an additional flavour to the frivolity, fitting perfectly into their roles – however small. The humour is also pitch perfect, balancing a delightfully childish sense of absurdity alongside intelligent references to everything from Darwin’s The Origin of Species to The Glutton Club (a Victorian society that existed to eat rare and exotic beasts). The most enjoyable of these involves Darwin’s ape-butler Bobo, a sign-carding chimp who is the butt of multiple Darwinian jokes.

Importantly, this is a family film in the very best sense of the term. It isn’t hard to imagine a family of young and old gathering to watch The Pirates! In an Adventure with Scientists – not because there is something for everyone (there isn’t quite), but because it’s honest, enjoyable filmmaking fun, almost guaranteed to entertain the vast majority of cinemagoers.