As a razor-sharp satire on the American obsession with all things ‘big’, director Lauren Greenfield’s documentary The Queen of Versailles (2012) is, quite frankly, jaw-dropping. As a car-crash depiction of the strained relationships of a family fixated with the accumulation of wealth and possessions however, the film is as mesmerising as it is shocking.

David Siegel was once one of America’s richest real estate tycoons. Along with his wife Jackie, Siegel squandered millions of dollars as fast as he earned them by, amongst other things, building the biggest mansion in America. Unfortunately, along came one of the worst global financial crashes in living memory and, as this fly-on-the-wall film shows, the Siegels’ dream life fast became a living nightmare from which they seem unable to wake. 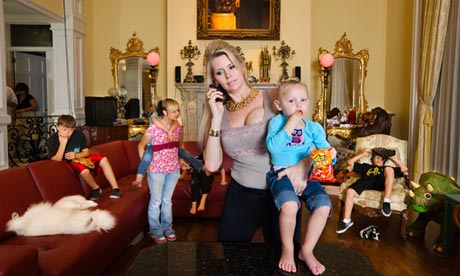 Only in America would you find a family like the Siegels, with the audacity to build a house based on Louis XIV’s fabled Palace of Versailles. Everything about their prospective home (the building of which forms the film’s core) – from its size to the over-the-top decor – is on a staggering scale. As a depiction of what happens when people with little or no taste accumulate more money than they know what to do with, The Queen of Versailles would be achingly funny – if it wasn’t all so pitiful.

It’s not only the new house which is totally exaggerated, but also the family’s unfailing vanity and belief in their own self-worth. By the time the film reaches its climax, it’s hard to ascertain which is worse and ultimately sadder; the misuse of obscene wealth – the scene where Jackie buys several new bikes for her kids for Christmas, only to walk home through a garage already heaving with dozens of them is wince-inducing – or David’s stubbornness and refusal to accept advice to find a way out of his financial troubles.

Unlike Louis XIV’s, the Siegels’ pot of gold was not bottomless. If Greenfield’s The Queen of Versailles does nothing other than serve as a timely reminder to both them and us to cut our coats according to our cloth, then some good might come out of their misfortune after all.