Following the success of their 2010 Blur concert film No Distance Left to Run, British directing duo Dylan Southern and Will Lovelace turn their attention to another historic rock gig with a legion of grateful fans and a set-list of modern classics – LCD Soundsystem’s final performance. Shut Up And Play The Hits (2012), a Sundance sensation, essentially sets the gold standard by which future gig documentarians ought to follow.

It helps to have an intriguing subject matter, of course. Not that there is necessarily a rock star blueprint, but James Murphy doesn’t fit it. He’s portly, swathed in greying stubble and has a penchant for scruffy, poorly-fitted suits. He started the LCD Soundsystem project – originally just him and his array of tech – in his early thirties, and retired the band in his early forties; and this relative maturity and somewhat grizzled outlook on life clearly infects his work (LCD’s debut single, Losing my Edge, is a wry take on how old and out-of-touch Murphy felt, even at 31). 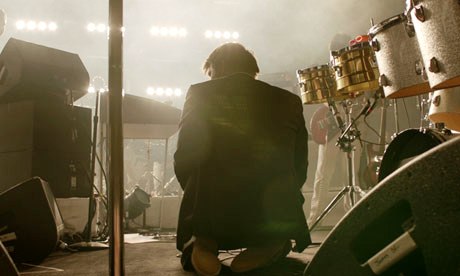 So, appropriately, LCD Soundsystem does not disband in the traditional manner – through “creative differences” or amidst a drug-fuelled burnout, but rather with a carefully controlled explosion. Murphy decided the time was right, and put on one final epic farewell concert at New York’s Madison Square Garden. Southern and Lovelace follow him over a 48 hour period. They flit between snippets of the three-hour gig and portions of an interview between Murphy and music journalist Chuck Klosterman. It’s an overwhelming, breathtaking ping-pong: from the hysteric euphoria of 18,000 screaming fans, to the quiet, introspective melancholy of Murphy, confronting the hangover of his life’s work.

Shut Up And Play The Hits it is beautifully shot. Most films from this under-loved genre follow utilitarian, television-style practicalities. Southern and Lovelace are more daring, experimenting aggressively with the proximity and angles of their cameras. The top-down bird’s-eye-views of the baying crowd provide an illuminating perspective of a mosh pit; another lens acts as an audience surrogate, thrusting us into the sweaty pit itself with thrillingly visceral effect.

As with most concert films, the question will always be whether non-fans need apply, and LCD Soundsystem’s unique brand of hipsterish dance-punk might not be palatable to all. But even the most stoic of musical tastes cannot help to be moved by the sweep of sentiments adeptly captured in Shut Up And Play The Hits, from the tearful goodbyes of lifelong friends, to the feverish Beatlemania-esque reactions from the fans – astounding for a band that only ever existed on the fringes of the mainstream.