A deeply mournful, semi anthropological ode to Russia’s long forgotten Merjan people – descendants of an ancient Finnic tribe, assimilated at some point during the Middle Ages – Aleksei Fedorchenko’s 2010 Golden Lion nominee (and, for some at least, festival favourite) Silent Souls is proof-in-point that serious, thoughtful European arthouse cinema doesn’t always have to come laboured with a hefty runtime. Fedorchenko more than makes the most of this brief duration, beautifully regaling a melancholic tale of love and loss, pertaining to both a recently departed wife and an almost extinguished way of life.

When industrial boss Miron’s (Yuriy Tsurilo) beloved wife Tanya (Yuliya Aug) falls ill and suddenly passes away overnight, he asks best friend and employee Aist (Igor Sergeev) to accompany him on a special Merjan ritual of remembrance, travelling to the homeland of their ancient Finno-Ugric tribe around Lake Nero, a picturesque region in West-Central Russia. Weighed down by both grief and nostalgia for a lost way of living – now forgotten by the majority of the country’s populace – Miron and Aist reminisce about their shared love(s) before saying their final goodbyes. 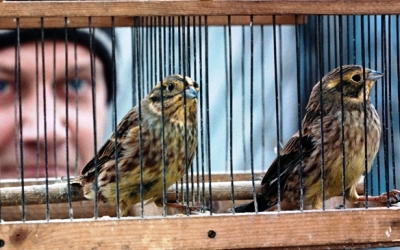 Aided by a delicate sprinkling of symbolism and evocative imagery (from caged Buntings to vodka-fuelled funeral pyres), Fedorchenko never lets narrative focus get in the way of a good story, gliding between reality and memory with impressive ease. The two central performances courtesy of Tsurilo and Sergeev are both staid and sombre, with little dialogue spoken between the two parties outside of ‘smoke’ sessions – wherein the grieving member relays a serious of highly personal (often explicit) anecdotes about their lost love. Despite directing such on-the-nose, crude remarks as “all three holes were working” towards the recently deceased, a genuine sense of longing and despair genuinely pervades this initially repugnant rhetoric.

Silent Souls also provides one of the most intriguing portrays of Russian seen on film this year. The country feels tangibly torn between old and new, with the duo moving across ancient vistas into modern towns and cities with relative ease. Sadly, it transpires that Aist and his Merjan brethren belong to neither world, functioning as nomadic shades caught in the uncertainty-filled hinterland between the past and the present. Like the caged Buntings that accompany the men, there’s is a tortured existence, able to look into the past but never to enter it.

It’s sparse narrative focus and minimal dialogue may well put off as many as it draws in, but for those able to associate with such a disparate tale of bodily and spiritual decline, Fedorchenko’s Silent Souls may well succeed in drawing long-repressed feelings of remorse and regret to the surface – an impressive feat.

Win a copy of Aleksei Fedorchenko’s Silent Souls on DVD with our brand new competition. Follow the link to enter.