A key part of the BFI’s Ealing: Light and Dark season and rereleased this Friday, Robert Hamer’s It Always Rains on Sunday (1947) is a much-underrated kitchen sink crime drama set over one dreary Sunday, telling a tale of working-class life set within London’s East End. Based on the novel by Arthur La Bernby, the story concerns the family life of Rose Sandgate (Googie Withers), a typical East End housewife married to the much older George (Edward Chapman) and living with his two young daughter Vi (Susan Shaw) and Doris (Patricia Plunkett) and their own young son, Alfie (David Lines).

Rose’s bleak, joyless life carries on in its mundane manner until her ex-lover Tommy Swan (John McCallum), jailed for robbery ten years previously, shows up at her door seeking refuge after escaping from prison. Very much falling into the darker side of Ealing’s output, this bleak portrait of post-war London is based in a world of little prosperity, rationing and in a Britain who can all too readily recall the sting of the war effort. Painting, as it does, an immersive, yet simple tale of life on the bread line, audiences will be quickly drawn into the small dramas of the everyday. 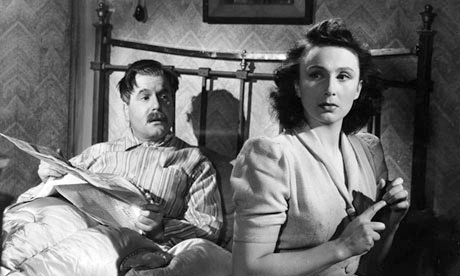 Outside of the home, the streets of Bethnal Green thrive with the hustle and bustle of the marketplace. Full of typical East End cheer, we’re provided with a series of subplots detailing the live of small-time crooks such as John Slater’s Jewish gangster Lou Hyams, who parades around the streets handing out favours and calling in debts. These stories weave in and out of the central narrative, enriching the colourful depiction of London.

Bleak yet always full of life, It Always Rains on Sunday is undeniably rewarding viewing, showing both the economical and emotional hardship faced by everyday people in extraordinary circumstances. A fantastic slice of Ealing cinema, Hamer’s film proved a perfect primer for the acclaimed kitchen sink dramas of the British New Wave.

For more info on the BFI’s Ealing: Light and Dark season, visit bfi.org.uk/ealing-light-dark.