Hoping to emulate some of the success of surprise 2011 hit Bridesmaids and even Nigel Cole’s The Wedding Video (2012), Jesse Lawrence’s The Knot (2012) creeps into UK cinemas this week with a trail of negative press following in its wake. Unlike the universally-panned Keith Lemon: The Film (2012), the team behind The Knot were at least brave enough to screen their gross-out British comedy to the national press ahead of its release. Unfortunately, such a gesture is unlikely to dissuade audiences from condemning the film to their ‘Worst of 2012’ shortlists.

Beginning with a familiar ‘to-camera’ set-up, the assorted friends of soon-to-be-weds Jeremy (Matthew McNulty) and Alexandra (Talulah Riley) provide testament to the loved-up couple ahead of their big day. However, as Jeremy and his merry band of man-children awake from a debauched stag party (all strippers and binge-drinking), the wheels begin to fall off this particular wedding wagon. Across the city, the bride-to-be is also having her own hefty dollop of drama, with a bout of diarrhoea and an AWOL bridesmaid to name but two of her pre-marital mishaps. 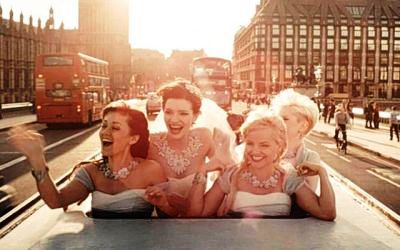 Co-penned by writer/actor/co-producer Davie Fairbanks, The Knot may well struggle to make an impression outside of its core demographic. Too much of the humour is reliant on base toilet humour and/or adolescent stereotyping, with even one-man film industry Noel Clarke (also involved at script stage) consigned to a bland supporting role. In his place, the rest of the groom’s assembled entourage do little more than childishly fumble their way through from one farcical scenario to the next.

The film’s female representatives fair just as poorly. Riley is yet to convince as a relatable screen presence, whilst American Pie star Mena Suvari (as bridesmaid Sarah) is frog-marched into a horrendously conceptualised lesbian subplot, much to the bemusement of both herself and paying onlookers. Once we reach the ceremony itself, a tagged-on domestic violence side story (cue abusive Scottish partner) fails to register, whilst the godly Father Poon (get it?) is left to blankly look on in dismay at the carnage before him.

Lawrence’s The Knot truly is the rarest of things – a film that would actually be improved by the inclusion of the inimitable Danny Dyer. The film falls almost entirely flat on its face at every turn, the only saving grace being its mercifully short 92 minute runtime. In addition, almost everyone involved has done immeasurably better work in the past, which makes it all the more shocking that The Knot was even considered as a plausible project by its devoted cast and crew. “Till death us do part” may seem like a viable exit route for those committed to seeing this bottom-drawer misfire.