Notorious is a word frequently overused when describing controversial horror films. However, the term somehow feels completely justifiable in relation to The Evil Dead (1981) – director Sam Raimi’s cult slice of schlocky hokum – starring Bruce Campbell, Ellen Sandweiss and Richard DeMaincor. Scarring, nauseating and amusing in equal measure, this is one of the few films which truly deserves cult status, managing to surpass even your wildest imaginings of gore and visceral violence. The basic plot revolves around a group of all-American twentysomethings who go for a weekend in the woods.

In the dilapidated cabin where they’re staying they find a tape-recorder with a message from the man who was living there previously. The previous homeowner and his wife were studying an ancient book which reputedly had the power to summon up demons. The kids find the book and decide to give the incantations in it a go. No sooner do they repeat them though, than they discover exactly what became of the couple as all hell breaks loose heralding a bloody night to dismember for everyone concerned. 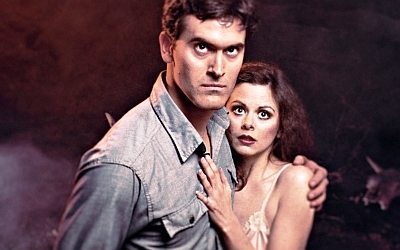 The Evil Dead is a film which is almost impossible to comment on objectively. It’s one of those cultural phenomena’s which has passed into popular legend, and everyone whether they’ve actually watched the film or not seems to have an opinion on it. However even those who have seen it, may be surprised at parts which they don’t remember when they sit down to watch the uncut version, which is currently playing as part of the BFI’s Uncut season at London’s National Film Theatre. Banned on its initial release as part of the video nasty debate in the early 1980s, when considered in the light of today’s CGI realism its hyperreal, cartoon violence is laughable – to a point.

It’s perhaps understandable as to why the scenes which caused the furore at the time (in particular the forest rape sequence) were deemed unacceptable as they are indeed hard to watch. However they are so over-the-top that by the end they loose all their menace through sheer silliness. Whatever your thoughts, there is no denying the film is still shocking in its full-on ferocity yet laudable for its sheer pizazz and unfettered sense of fun – it may have been made by a bunch of young people with next to no budget, but they clearly had a whale of a time doing it and this shows.

In the end The Evil Dead should be regarded for what it was – a groundbreaking feat of entrepreneurial filmmaking which proved, much like The Blair Witch Project (1999) did again several years later, that big studio backing and millions of dollars are no prerequisite for originality and wit.