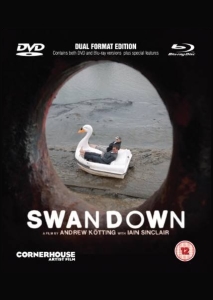 British psycho-geographer Iain Sinclair was one of the more vocal opponents to the London 2012 Olympics because, to quote one of the contributors of Andrew Kötting’s Swandown (2012), “he [Sinclair] doesn’t think anything is allowed to happen in Hackney without his permission”. At least that is the opinion put forward by comedian Stewart Lee in the gentle chiding he gives him during a brief stint in an avian pedalo in Kötting’s latest visual oddity. The film, born partly of a desire to make an anti-Olympic statement, is a surreal and experimental travelogue through the waterways of southern Britain. 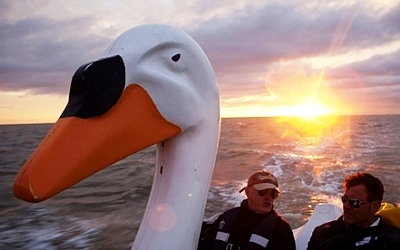 Boarding a swan-shaped pedalo liberated from a seaside resort and christened Edith (after Swan-Neck), Kötting and Sinclair set out to navigate their way from Hastings to Hackney. Kötting proves the anchor of the voyage joined along the way by various thinkers whilst still wearing the same unwashed suit. Ever accompanied by the fast-flowing current of Sinclair’s thoughts, Swandown is filled with relevant musings on the surrounding countryside, and the nation in which they live. This is all punctuated by chance encounters with locals on the banks of various rivers giving us a glimpse at the real people making up the landscape.

The eloquent words of Sinclair are interspersed with those of poets, playwrights, filmmakers and more whilst we see Edith forging her way as well as cuttings of archive footage. Whilst for him the journey is “Homeric”, it could easily be considered Herzogian for Kötting. He set out primarily not to bemoan the corporate destruction of national identity, but to undertake the ridiculous and glorious task of making it all the way from the coast to the Olympic construction site on a pedalo. Swandown stays amusing throughout, with Kötting often undercutting its heavier moments with a self-deprecating joke or two. That’s not to say that he is not interested in Sinclair’s gripes, but the film is best enjoyed as an amalgamation of both fun and statement. The interlude that sees Lee sharing the pedalling with Watchmen writer/creator and prophet Alan Moore sees them comically fretting that people will not understand the film. As it is, the thoughts purveyed are always lucid, but Kötting is definitely interested in abstracting them where he can, and as such the film is not likely to be to everyone’s tastes. If you are a fan of Kötting’s other work, it will certainly go down well and if not, Swandown may be an intriguing place to start.