The adjectives ‘tragic’, ‘powerful’ and ‘heart-breaking’ don’t really do justice to Jesse Vile’s Jason Becker: Not Dead Yet (2012), a documentary about the life (to-date) of titular guitar-virtuoso, Jason Becker. Vile’s film invokes far more than just sympathetic sentiment, with it’s truly inspirational story of the tragedy endured by both Becker and his family. This is a true testament to the power of the human spirit, and offers an expose of the strength that genuine love from family and friends can afford. At the age of just five, Becker was given his first guitar. At age 12, his rare talent began to show as he played Eric Clapton guitar solos, note-for-note to audiences at school.

By age 15, Becker was blowing the minds of his friends, family and schoolmates with his guitar playing ability, and by 16 – after sending his demo tape to Mike Varney (a local record label founder) – Jason had himself a record contract. This new opportunity took him on a journey that thrust him amidst the pantheon of pioneering and prodigal musicians of the 1980s rock scene, with the likes of Eddie Van Halen, Steve Vai and Joe Satriani all forced to pay attention. In no time at all, Becker was at the pinnacle, with ex-Van Halen singer David Lee Roth taking him on board as the new guitarist for his band. 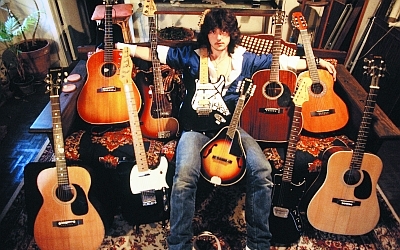 Without doubt, Becker had just gotten the biggest job in rock, but only one week later a colossal fall from grace was inevitable as he was diagnosed with ALS (Lou Garrick’s disease), giving him just three-five years to live. Yet, twenty years after this potentially life-shattering diagnosis, and against all the odds, Becker is still alive, albeit without the ability to walk, speak, or physically play the guitar.

At the outset of Not Dead Yet, Vile presents us with what appears to be family footage of Becker and a friend, jamming a funky version of The Byrds’ Mr. Tambourine Man on guitar which is then cut abruptly to footage of the man shredding riffs on a stage. This drastic change speaks volumes about the nature of the man and the abruptness of the transformations that have taken place in his life, whilst also managing to highlight the style of filmmaking chosen by Vile. In addition, he manages to tell the story of Becker’s life with an undercurrent of the same optimism as its subject, and for that reason the film has a genuinely uplifting feel, regardless of the sad events it documents.

Vile ensures that Becker’s true personality comes through in the film, allowing for funny anecdotes from friends and fellow musicians, and even leaving-in some of the hilarious banter that takes place between him and his father. With Jason Becker: Not Dead Yet, Vile delivers an account of his subject’s disease, whilst devoting more time to documenting the amazing story of Becker and the loved ones around him.