The Scottish Baftas took place at Glasgow’s upmarket Radisson Blu Hotel last night where host Edith Bowman, an assortment of Scottish film and television personalities and five hundred guests were on hand to honour and celebrate the very best of film, TV and games over the past twelve months. After a red carpet that was surprisingly removed of rain, wind and thunder and beefed up considerably by the presence of Scottish acting legend and passionate Scot Brian Cox, the guests filed into the lavishly decorated ceremony hall, while the press where led to the media room, where the winners would be ushered to moments after collecting their awards and delivering their unforeseen speeches.

Lucky recipients in the television and game categories included: Mrs Brown’s Boys, which won the Comedy/Entertainment Programme Award; Bad Hotel, which claimed the Best Game statue; and Gregor Fisher, who took home the Actor/Actress – Television Bafta mask for his role as Robert ‘Rab’ C. Nesbitt in the highly adorned BBC Scotland sitcom. It was a night more of less dedicated to film, however, with Ken Loach’s bittersweet comedy The Angels’ Share, dark comedy Up There and spooky horror Citadel all nominated for the prestigious Best Film award. The winner, whether you agree with the decision or not, was Up There, a film about two ghosts caught in purgatory who have to chase down a new arrival written and directed by newcomer Zam Salim. 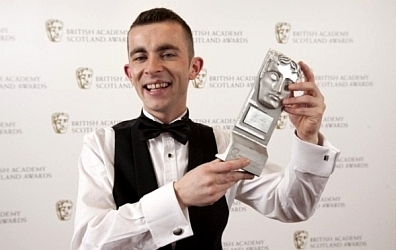 Salim, who was nothing but a gent, also fought off strong competition from Mark Cousins and Michael Keillor to be crowned Best Director, leaving many baffled as to why Up There didn’t receive a more aggressive release campaign. Meanwhile, Paul Laverty, who penned The Angels’ Share for Loach to direct, walked away comforted with the Best Writer statue. There was no one in that entire room who deserved the recognition for their achievements more than Paul Brannigan. Paul, who was plucked from near obscurity by Laverty, Loach and producer Rebecca O’Brien on a talent hunt for The Angels’ Share, walked away with the Actor/Actress award and delivered the most genuinely heartwarming speech of the entire night.

His speech was rivalled only by the unexpected messages delivered by Star Wars director George Lucas, who was on-hand to recognise the talents of costume designer and Outstanding Contribution to Craft winner Trisha Biggar, and Outstanding Contribution to Television and Film winner Billy Connolly, who was otherwise engaged in San Francisco. The night then drew to a timely and celebratory close with a three course banquet and lively ceilidh, where guest mingled with celebrities, the press’ commitments elapsed and the party could well and truly get started.