Arriving on DVD after a brief run in the capital at the end of last year, Partners in Crime (2012) is the third film in a succession of Agatha Christie adaptations from French director Pascal Thomas. The first in the series to receive a UK release, this is another audacious outing for Bélisaire and Prudence Beresford played by André Dussollier and Catherine Frot. The film is a pleasant comedy caper that loses its way a little towards the climax but remains watchable thanks to the charming leads. The series is based on Christie’s short stories about Tommy and Tuppence (now Bélisaire and Prudence) – adventurous spirits that have clearly been in their fair share of scrapes.

Nominally retired, their sleuthing and treasure-hunting days are behind them. Bélisaire has turned author of thrilling yarns based on their exploits but his wife misses the thrill and is bored. She decides to get back into the game and starts a detective agency with quick results; a celebrity arrives asking her to track down his missing fiancee. The path leads to a secluded health spa where it seems that a cure for ageing may have been found. 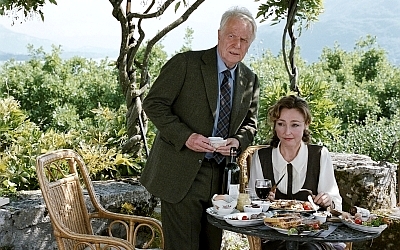 Partners in Crime has its tongue firmly in its cheek for the most part balancing the mystery of the missing woman and the anti-ageing procedure with a broad but gentle quality. The performances from Dussollier and Frot achieve the same effect providing protagonists whose repartee is enjoyable and whose exaggerated expressions are a little bigger than initially expected. Regrettably, whilst the tonal balance is fine, neither the mystery nor the comedy is done quite well enough to elevate the piece as a whole.

This is compounded by a final act twist which feels entirely incongruous introducing a supernatural element entirely at odds with the narrative up to that point. This may well be a recurrent aspect of the Beresford’s adventures but here it sees the gum-shoeing sidelined – or in fact, finished early – in favour of a more overtly farcical fare. This means that the film ends on a rather bum note rather than a satisfying conclusion to the case.

Still, as far as frothy French capers go, it does the job required of it and as noted, the two leads are delightful company. What Thomas’ Partners in Crime (2012) feels like it needs are a few more laughs, or a more enthralling mystery, to counteract its disappointing finale.