“You’re a disturbing young man” says Buffy (Judy Davis) to Boy (River Phoenix). The latter is showing the former around a fallout shelter in the Utah desert, redecorated by him for prosperity as a mystical cave. It’s one of the few completed interior scenes in the long-lost but not forgotten Dark Blood, Dutch auteur George Sluizer’s unfinished 1993 project, following the death of its star, River Phoenix. Steering clear of sensationalism, Dark Blood is the kind of quirky indie fare that studios would still care to green-light in the 1990s, thanks to an excellent script by Jim Barton and beautiful photography from veteran cinematographer Ed Lachman.

Buffy (Davis) and Harry (Pryce) are your typical Hollywood couple – she’s a former showgirl/bunny, he’s a working actor in pictures. While on a leisure trip in the desert, their vintage car keeps breaking down, first in the vicinity of a motel where they get acquainted with local folklore – the area was once a nuclear testing site – and a second time in the middle of nowhere, where the only rescue comes in the form of Boy (Phoenix), who is living in a shack on the outskirts of civilisation. 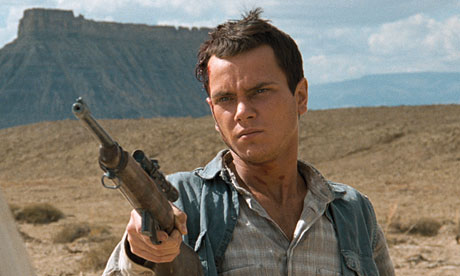 With the Indian blood in his veins still raging from his wife’s death (most likely linked to contamination), Boy is a complex, multi-layered character and radiation, loneliness – his only company is a dog – and an unsteady diet of rats he hunts in the desert don’t help his social skills with the unexpected guests. He is annoyed by Harry, whom he likes to challenge, and immediately lustful for Buffy, who repeatedly he tries to seduce. She is genuinely intrigued and flattered at first, but also disgusted and ultimately scared. Unfortunately, this is the part of the plot which is most affected by Phoenix’s death, as the key interior scenes were scheduled to be shot in Los Angeles after the unit had wrapped in Utah.

The missing scenes are substituted by a voice-over narration. One can only glimpse at the possibilities of what might have happened between the characters behind closed doors, which would have allowed us to judge more accurately the film’s success, or failure – and Phoenix’s performance.

Would we still be talking about this film two decades later, had it been completed and had it not been forever labelled as ‘the last film from River Phoenix’? Given Phoenix’s previous work, talent and potential, Dark Blood may well have drifted into obscurity had he continued his career – a minor footnote in an extremely strong filmography. But since he only worked on a dozen films in his life, finally being able to watch Dark Blood is a great privilege.