★★☆☆☆
Produced by Guillermo del Toro, the visionary filmmaker responsible for putting Spanish-language fantasy back on the map with efforts such as Cronos, The Devil’s Backbone and Pan’s Labyrinth, Andrés Muschietti’s Mama (2013) has clearly taken its cues not only from del Toro’s own back catalogue, but also the cinematic tradition of pans-European/Japanese horror. Sadly, this particular Spanish-Canadian co-production never quite feels like the sum of its parts, devolving disappointingly into a nuts ‘n’ bolts chiller with sparse originality of its own. Like a fairground ghost train, the more we understand the mechanics behind its scares, the less effective they become.

Mama opens to a domestic homicide, as bankrupt businessman Jeffrey (Nikolaj Coster-Waldau) shoots his own wife before vanishing into the woods with his two young daughters, Victoria (Megan Charpentier) and Lilly (Isabelle Nélisse). Discovered five years later in a derelict log cabin, the feral children are rehoused with their Uncle Lucas (again, Coster-Waldau) and his rocker girlfriend Annabel (Jessica Chastain). However, as Annabel tries to reintegrate the girls back into society, hushed whispers of an entity known only as ‘Mama’ begin to surface. Faced with a dark, malevolent presence, Annabel is forced to become the protective mother figure that she has always rebuked. 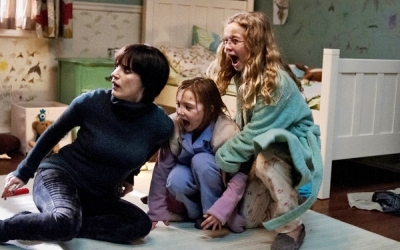 Though it is, of course, pleasing to see a North American horror eschewing torture porn-style gore, there is the distinct sense that Muschietti has reverse-engineered his Canadian haunting from a number of past international successes. As the film’s hand-drawn credit sequence illustrates, there’s more than a hint of Juan Antonio Bayona’s The Orphanage (El orfanato, 2007) about proceedings, while the lank hair of Mama herself (Javier Botet) can’t help but rekindle memories of Hideo Nakata’s Ringu cycle. Solid performances from Chastain, Charpentier and Nélisse do help to paper over some of the joins, but Muschietti still relies too heavily on cheap tricks and toothless jumps to ratchet up the tension.

In terms of Mama’s overarching narrative, we still have a number of familiar tropes taking precedence. The abandoned forest dwelling is your quintessential ‘cabin in the woods’, whilst Daniel Kash’s child psychologist Dr. Dreyfuss functions almost purely as a cynical plot device to link together the past and present. More apparent still is the perennial theme of paedophobia, which Chastain’s angsty heroine finds herself lumbered with courtesy of the film’s somewhat muddled script (though it could be argued that Annabel simply dislikes children, rather than overtly fearing them).

Plot twists, as has become the norm, are frequent and forthcoming, with a 19th century transgression adding yet another layer to this disappointingly hackneyed tale, which ultimately finishes on a befuddled whimper rather than a bloodcurdling wail. Though not a complete aberration per se, there’s precious little to differentiate Muschietti’s Mama from the plethora of del Toro-apeing spine-tinglers released each and every year. Lacking in both ingenuity and genuine scares, this is one ghost train ride that you won’t be replaying in your dreams for days and weeks to come.