Writer and director David Koepp has had a track record of minor hits and misses over the years, including Stir of Echoes (1999), Secret Window (2004) and Ricky Gervais vehicle Ghost Town (2008). His latest movie, Premium Rush (2012), is an action movie starring guy du jour Joseph Gordon-Levitt as New York’s fastest and coolest messenger Wilee, a thrill-loving courier attempting his last delivery of the day. What begins as a relatively straightforward envelope delivery, quickly turns into deadly pursuit when corrupt cop, Bobby Monday (Michael Shannon) takes a keen interest in the envelope’s contents.

Wilee encounters many complications on his journey including a romantic altercation with his love-interest Vanessa (Dania Ramirez), a personality clash with co-worker Manny (Wole Parks) and a fracas with a hilariously hopeless bike cop. The seemingly simple job becomes progressively complicated especially when the mysterious content of the package is revealed. If Wilee fails to make the delivery on time, his client Nima (Jamie Chung) will lose out on something much more precious than the contents of a gum sealed envelope. 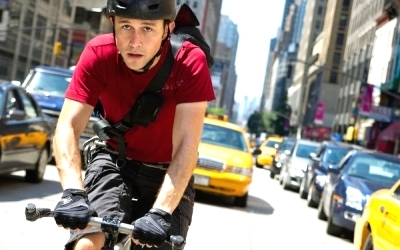 Although Premium Rush’s plot sounds standard, events don’t unfold in chronological order and the film begins more or less where it ends. There are countless flashbacks and flashforwards, focusing on different aspects of each individual character’s journey. Unwilling to lose his audience, Koepp provides an overlaid digital clock that shows the time rapidly advancing or rewinding to the following scene. It’s a smooth move that ensures the viewer becomes further embroiled in the plot as motives and explanations are revealed between scenes of exhilarating action. With high speed cycles interweaving between oncoming traffic, the journey is overwhelmingly exciting as the perspective switches from bicycle to cyclist.

An extra dimension is further added to Wilee’s role as, from his point of view, time is slowed down to demonstrate his crucial decision-making and the drastic consequences of the wrong choice. This element adds substance, tension and originality to what could easily have been a conventional and predictable action film. Gordon-Levitt in the lead is as charming and charismatic as ever. His nemesis is played with an increasing level of menace by the brilliant Shannon, and together the two lift their characters way beyond the usual requirements of the genre.

Koepp’s latest is faster and more furious than any film that uses those words in its title and while thoroughly modern, it also embodies the retro-sentiment of teen action classics such as BMX Bandits (1983) and Gleaming the Cube (1989). The thrills come thick and fast via the skilful chronological composition and the director keeps his finger firmly on the pulse, ensuring that the excitement never once wanes. Premium Rush’s tyres are pumped full of high-octane, non-stop, no-brake action, which gears up to a huge, stimulating amount of fun from a cool courier who definitely delivers the goods.