As far as US rapper Snoop Dogg (now ‘Snoop Lion’) is concerned, he’s in reassuring hands throughout new doc Reincarnated (2012) – a righteous Rastafarian riding on an overbearing wave of hallucinogenic happiness in the heart of Jamaica. Dogg’s faded cousin even accompanies him on this augmented road to Jah’s enlightenment. So far, so good for the superstar smoker. What may have been intended as the jewel in Reincarnated’s crown is the involvement of first-time director and Vice cardinal Andy Capper, who utilises his progressionist nous to capture every moment of Dogg’s gradual evolution into a higher form; into Lion.

At best, Reincarnated is an interesting exposé into one of music history’s most lauded characters; a semi-reflective, consoling, ethereal account of an individual that has cooperatively reconstructed modern hip hop with a dubiously seedy legacy in tow. But what the film sadly misses is any real candid impartiality. Instead, we are presented with a glorified celebrity holiday home movie, severely lacking in critical coherency. Thankfully for Capper, Snoop plays baked inertia to perfection. Scene by scene, our star absorbs marijuana as if connected to an intravenous drip. 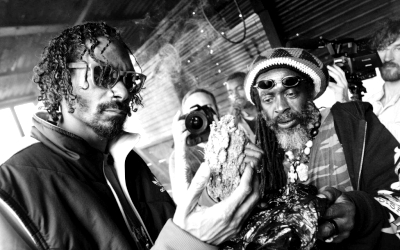 Waddling around the streets of Jamaica, Snoop meets with nu-dancehall pioneer and Major Lazer cohort Diplo, to collaborate on a new wholly reggae album. Sick of his latter-day sins and the loss of his 214 cousin, Nate Dogg, in 2011, a meditative Snoop travels to Jamrock seeking his own doped-up version of utopia. Along the way, Snoop murmurs poignantly of past musical alliances with the likes of Dr. Dre and the non-hologram, real-life Tupac Shakur. At times, such recollections are genuinely engaging (especially if you’re as stoned as Snoop is). Snoop was certainly at his most revered and ‘no-no-notorious’ in his late teens, when Death Row Records was the most dangerous and exciting label on the planet.

There’s no denying that Capper has approached Reincarnated with nothing but honour and pride over his subject. Scenes such as Snoop’s smoke-up meeting with reggae legend Bunny Wailer are truly heart-warming, as the aged Rasta blesses the former Dogg with his new Lion moniker. Watching Snoop lazily skank to the sounds of a local reggae youth group again are filmed with real soul and passion. But the overall polished, anti-negative light on its charismatic main attraction makes Capper’s documentary feel more than a little contrived.

Adroit moments in the studio, while offering sneaky ‘behind the scenes’ perspectives show less of a record in creation and more of Diplo’s production team shrouding the artist with praise. Perhaps Snoop Lion deserves all of this constant accolade to his success: he has, after all, cemented himself in music’s never-ending narrative. But for a film endeavouring to chronicle a 41-year-old stoner attempting to soberly walk down the path of enlightenment, Capper’s Reincarnated ultimately loses track in the presence of stardom.