The Intellect Directory series have consistently been at the forefront of scholarly movie cataloguing. From the oriental marvels of Japan to the war-torn potency of Russia, the collections have never failed in their conciseness, creativity and coherency. Real, professional essayists reporting on hyper-specific topics only they have the qualifications to confidently dissect. Each addition to date, including their most recent publication on the wonders of French cinema, has offered an exemplary segue between entry-level warmth to modest, detailed analysis. What Intellect achieve is the perfect equilibrium between the so-called ‘obvious’ choices and the lesser-known geniuses that deserve their moment in the literary limelight. 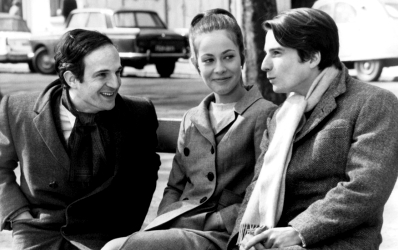 The French directory highlights the familiar, including an extensive interview with ex-Cahier du Cinema editor and Nouvelle Vague pioneer, François Truffaut. But it’s the emphasis on ‘the other’ that makes it such a profoundly substantial collection of commentaries. Divided into absorbable chapters, fundamentally focusing upon genre specifications, the directory avoids the stereotypical chronological arrangement. Arranged using comprehensive typography and well-resourced images, the segments remain engaging and attractive from cover to cover.

Opening with a bite-size summary of Céline Sciamma’s touching study of gender identification and youth, Tomboy (2011), the directory sets a sincere, visually intriguing tone celebrating the future generation of movie makers before delving directly into an infinite pool of French history. Following this, the collection sheds light on French cinema’s grey areas, including an ample study of ‘Women Filmmakers in France’, a somewhat sardonic examination of the ‘Tradition of Quality’, and the country’s contribution to the horror genre. Critical observations of Resnais’ Last Year in Marienbad (1961) shortly succeeded by Bustillo and Maury’s Inside (2007) makes the directory’s choice in films vibrantly resourceful and innovative.

Editors Tim Palmer and Charlie Michael have accumulated the masterful acumen of some of our day’s most important left-leaning cinephiles. Entries to note from Marc Saint-Cyr and Jonah Horwitz are especially encyclopaedic in their annotations. Provocative yet rigorous in their research. Each writer proves their worth, demonstrating exactly why they have been included in this new edition. Intellect have complimented their already globally renowned series with another gem heralding the importance of world cinema and its ingrained bilingual influence from one culture to the next.

Directory of World Cinema: France is available to own now, courtesy of Intellect Books.