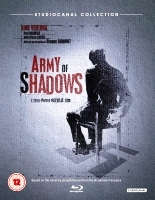 The latest addition to the StudioCanal Collection sees the Blu-ray premiere of director Jean-Pierre Melville’s controversial World War II drama Army of Shadows (L’armée des ombres, 1969), starring Lino Ventura and Simone Signoret. Philippe Gerbier (Ventura) is the head of a small French resistance group. Along with his comrades, including the independently minded Mathilde (Signoret), Gerbier must fight danger and treason from both outside and inside his circle, before the volatile situation and ever-present fear of danger reaches a dramatic climax. Is it right to find fault with a film held in such high regard by scholars the world over? 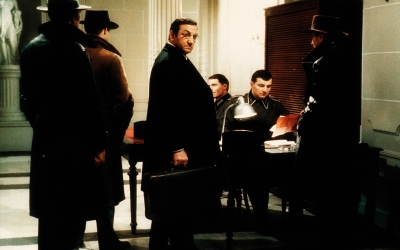 Unlike many films which have dealt with the subject of resistance fighters during the Second World War (such as ‘boys’ own’ takes like the 1964 Burt Lancaster vehicle The Train), Army of Shadows does nothing to glamorise this harsh and violent period of history. As a result Jean-Pierre Melville’s drama deserves praise for depicting with unsentimental realism, the turbulent lives of the men and women who gave themselves for the freedom of their country. Melville’s minimalist, reportage style of filmmaking lends itself perfectly to the austerity of war torn France. However, where the film fails when watched now, is in its lack of characterisation. Who are these people fighting against occupation?

None of Army of Shadows’ central characters elicit any sympathy from the viewer for their cause. Ventura’s portrayal of Gerbier as a cold, isolated loner, though undoubtedly accomplished leaves you caring little as to his ultimate fate. In particular his obvious contempt for a group of British service men and women ‘enjoying’ themselves in a makeshift club during a London air-raid, makes him appear unfeeling and blinkered. This highlights the film’s main flaw, namely any form of interaction between the central characters and the world outside.

You never see, and hence never get any feeling, for the French citizens who these resistance fighters are supposedly willing to give their lives for. Atmospheric in its depiction of the constant air of suspicion in which people lived during World War II, this film is stronger than any sanitised Hollywood version would likely have treated the same subject matter. As a piece of cinematic entertainment, however, Army of Shadows leaves behind a lingering and bitter aftertaste.