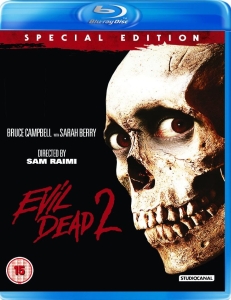 Back in the 1980s during the height of the BBFC’s ‘video nasties’ witch-hunt and the introduction of the 1984 Video Recordings Act, Sam Raimi’s The Evil Dead (1981) was seized from shops, edited, re-edited and finally given an 18 certificate in 1990. This silliness created a situation in which Raimi’s own Evil Dead II (1987) was freely available, but you could only get hold of a pirate copy of its predecessor. In fact, legend has it that nobody was willing to even finance an Evil Dead sequel due to the censorship issues until Stephen King declared his love for the original over dinner with producer Dino De Laurentiis. 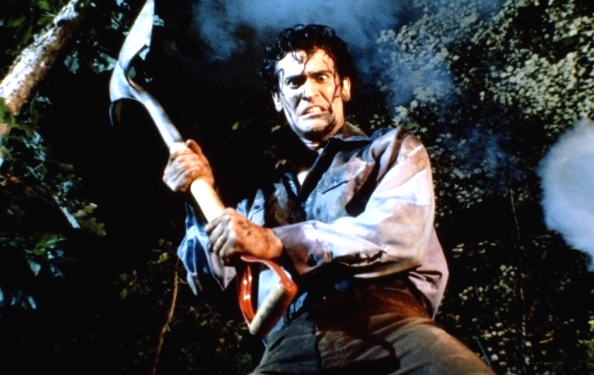 Rereleased on Blu-ray this week (courtesy of StudioCanal) in conjunction with the new Fede Álvarez remake of the first Evil Dead film, Raimi’s blood-splattered sequel is a classic comic-horror showcasing Raimi’s camera trickery and the comic talents of his leading man, Bruce Campbell. Campbell returns as hero Ash Williams, who sneaks into an empty cabin in the woods with his girlfriend, stumbling upon a videotape recording of the cabin owners discussing his discovery of an ancient text called the Necronomicon Ex-Mortis – or Book of the Dead.

Passages are recited, evil incarnate turns Ash’s girlfriend Linda (Denise Bixler) into a witch and he decapitates her with a shovel – but the fun doesn’t end there, as Ash is forced to cut off his own hand with a chainsaw, strap on his beloved boomstick and battle the forces of darkness. Although the basic premise is the same as the original outing, Evil Dead II is a very different beast. Intentionally funny and loaded with gore, Raimi relentlessly attacks Ash throughout with demonic trees, rotting witches, his own camera and various animated creatures that look like they’ve just escaped from Ray Harryhausen’s reject bin.

Ash’s decent into madness is beautifully played by Campbell, whose matinee idol good looks and exaggerated facial expressions helped to create a genuine 80s horror icon. In particular, the scene in which his own possessed hand assaults him in a kitchen is a masterclass of physical comedy. Yes, Raimi’s sequel is extremely violent in places, but it’s all played for laughs and only the most sensitive of souls would be permanently traumatised by such genre high jinks. If you’ve already seen Evil Dead II then you’re probably a fan; if not, then it’s high time you headed down into the cellar and carved yourself a witch.