★☆☆☆☆
Joseph Kosinski’s dire new sci-fi Oblivion (2013), starring Tom Cruise, was made for an estimated budget of $120 million. Whilst this certainly isn’t the pinnacle of filmmaking excess, the gargantuan sums spent on Hollywood blockbusters are often impossible to justify. Occasionally, however, a movie will have just enough redeeming features to make you forget how much money it cost to bring it to the big screen. Oblivion is not one of those examples. Cruise plays Jack Harper, a hardy survivor in a bleak post apocalyptic future, forced to dwell on a floating platform with his co-worker/love interest Victoria (Andrea Riseborough). 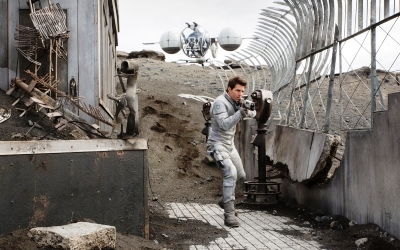 Jack – like a living, breathing, human Wall-E – spends his monotonous days flying around the now-volcanic surface of the Earth in his sleek shuttle, fixing sensor drones and maintaining the monolithic towers which now harvest the planet’s oceanic energy in order to provide fuel for fellow refugees of the devastation – now residing on Titan, on of Saturn’s moons. With only two weeks to go before he’s due to complete his mission objective, an inquisitive Jack discovers a crashed spacecraft which forces him to question both himself and the high orders provided by sinister superior Sally (Melissa Leo).
For a sci-fi premise, though familiar, the aforementioned is a pretty solid one. Any writer with a modicum of talent should have been able to fashion a half-decent screenplay from those raw ingredients. Yet, writer/director Kosinski (2010’s Tron: Legacy) has somehow managed to create an emotionally-barren and tediously convoluted film, brimming with risible dialogue and plastic performances. Hollywood royalty Cruise has been around Hollywood for long enough to know when he’s signed up for a clanger, but unless the hatchet job done in the editing suite was even more vicious then the sloppy final scene transitions suggest, the Minority Report star must be ruing the day he ever signed up for this dull, drab séance.

Some Oblivion apologists may point to the original soundtrack by French electro outfit M83 as a highlight – the same individuals who may also suggest that any film which features Andrea Riseborough’s nude silhouette is worth the price of an IMAX ticket alone. Alas, the sad truth is that most cinemagoers with a true love of science fiction cinema will struggle to enjoy this uninspired dud. Why not spend your hard-earned currency on a charity donation instead? Not only will you feel spiritually-enriched, but you’ll also be saving the souls of everyone involved in this project; many of whom could rightly struggle to find future gainful employment when Oblivion inevitably goes down like a lead balloon at the UK box office.