One of numerous films to make its way to London from the Cannes, Alex van Warmerdam’s Borgman (2013) is the darkest of dark horses: an obsidian black comedy with a surreal and genuinely vicious ‘eat the rich’ ethic that might just pinch a prize. The film opens with a beautifully ludicrous scene as three characters – including a Roman Catholic priest – get tooled up and attempt to capture and possibly kill what seems like a group of homeless people who are living in a Stig of the Dump-style underground hideaway. Their bearded leader, Borgman (Jan Bijovet), makes good his escape and searches for sanctuary. 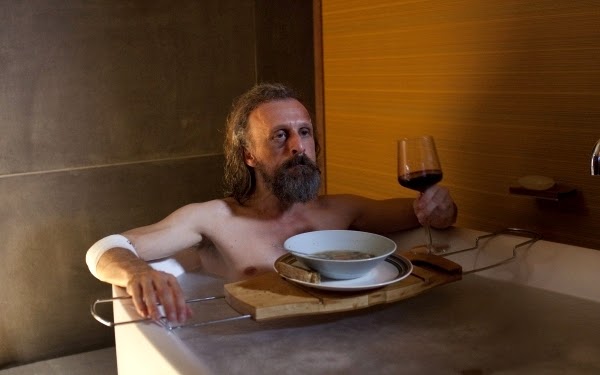 Borgman’s direct approach with a particularly wealthy family living in a large, gated compound leads only to a beating, handed out by Richard (Jeroen Perceval). His artist-wife Marina (Hadewych Minis), shocked by his violence, takes pity on the tramp, allowing him his bath and seeing to his injuries, but soon the power has shifted subtly. As Borgman’s associates approach and his influence spreads, it becomes clear that something very evil is going on. With its isolated communities and murky wit, the film is more similar in tone to Yorgos Lanthimos’ Dogtooth (2009) than Bruno Dumont’s Hors Satan (2011). Yet Borgman is very much its own twisted creature, ingeniously forcing its audience to smirk at scenes of genuine nastiness.

The family themselves are set up as fairly repulsive individuals who let the demons enter their house because it suits them; they’re too busy, or they’re more willing to hire the devil incarnate as a gardener rather than an immigrant. The magic of the film is cunningly portrayed, partly medical, partly chemical, and with plenty of psychological manipulation. Underneath all the comedy and the cleverness, however, there seems to be a very clear anger at those who have cut themselves off from the world behind their wealth and their greed. The children are already Midwich cuckoos and Richard – with his racism, pent-up anger and workaholic drive – is an obvious target for the satire. His wife Marina, too, proves herself to be just as unsympathetic and selfish as the rest.

The viciousness of the critique is in its tension with the comedic. The underworldly pairing of Ludwig (a witty cameo van Warmerdam) and Pascal (Tom Dewispelare) is akin to a murderous take on Laurel and Hardy, answering their cell phones, sleeping in the bed department of a furniture store and watching TV: “Hurry up, the friendly chemist is actually a serial killer.” There are scenes when Borgman risks tipping into whimsy, but overall this is a brilliantly-imagined fantasy of desperation, a revenge against knuckleheaded entitlement and the fabulously wealthy.