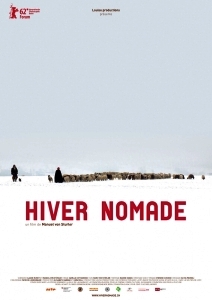 Like Vincent van Gogh’s 1884 practically-titled painting, Manuel von Stürler’s debut documentary Winter Nomads (Hiver nomade, 2012) is a portrait of a ‘Shepherd with a Flock of Sheep’. The subjects of the filmmaker’s pastoral, however, are not situated in the 19th century or confined to the pages of a history book, but a living, breathing anachronism set against the winter landscapes of modern day Switzerland. The shepherds in question here are the sage, old Pascal and the young and willing Carole; the nature of their relationship is never made explicit, other than the fact that she is clearly the apprentice to his master herder. 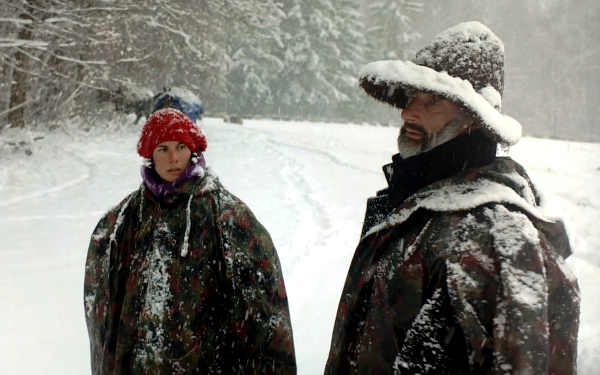 The pursuit? A ‘transhumance’; spending four months on the road/track/field with three pack donkeys, a trio of tireless sheepdogs (plus Leon the puppy) and their 800-strong flock who they will slowly fatten up, naturally feeding on any grass they can find. They encounter others throughout this gentle doc; from an elderly couple who have, for years, offered Pascal a shower and hot meal as he passes their home, to farmers warning the scrounging shepherds to keep off their fields. Von Stürler captures this entire journey against the ceaselessly beautiful countryside and, like the hypnotic movements of a starling murmuration, sheep pouring across a field or through a town becomes mesmerising.

Scenes are regularly stolen by the animals: the ovine contingent is represented by the memorable bellwethers (individual sheep who lead the flock); there is more than one humorous moment involving wayward donkeys; and Leon increases the cuteness factor exponentially. The taciturn Pascal spends much of his time barking orders from behind his shaggy beard, either at donkeys, dogs or Carole. She in turn has spirit enough not to suffer in silence when reprimanded on camera, though she does take his admonishments very well. Perhaps this is because she is used to them, perhaps it is because they have been staged as other scenes certainly were; a chance encounter with a young woman allows, all too conveniently, for an opportunity to explain what a ‘transhumance’ is.

Incongruous shots of hundreds of sheep passing beneath a motorway bridge remind us that this is a dying way of life, and whilst a salient point, illuminating us to this obvious fact is not the director’s aim. He is interested in how these people manage with this bucolic existence and it becomes clear that Carole gave up the fast pace of modern city life for this one. Someone once said that a profession is not what brings home the pay-check, but what someone is on the earth to do; this is the heart of Winter Nomads, and you can’t see Pascal and Carole wanting to be anywhere else.

Winter Nomads screens as part of the DocHouse strand at London’s Riverside Studios on 6 June, 2013. For more info, visit dochouse.org.