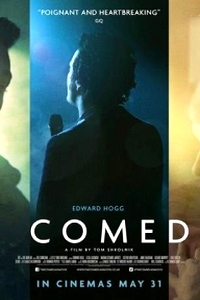 Part of the way through British filmmaker Tom Shkolnik’s debut feature, the eponymous character – aspiring stand-up comic Ed (Edward Hogg) – performs a routine about gardening which has his audience fidgeting as nervous laughter ripples through the venue. Whilst The Comedian (2012) is not actually a comedy per se, it’s hard not to empathise with that audience, as the film labours from its opening scene and never really manages to engage or offer an insight into the lives of its characters. Ben is stuck in an overwhelming rut. He spends his days on a telephone attempting to sell medical insurance to middle-aged women. 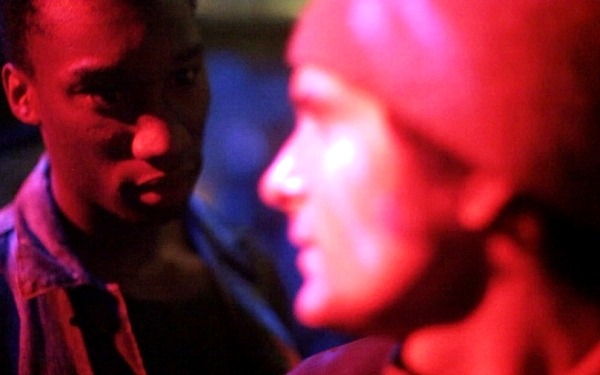 Ben’s evenings involve going out drinking with his house-mate Elisa (Elisa Lasowski), or struggling through comedy gigs. After the aforementioned gardening routing, however, the drudgery of his life, and its similarly unexciting portrayal on screen, looks like it may be broken by a chance meeting with Nathan (Nathan Stewart-Jarrett). The two begin a relationship but things go awry when it becomes clear that Elisa has feelings for Ben. Filmed without a script by first-time director Shkolnik’s, who preferred to ‘workshop’ through the scenes with his actors, The Comedian does have moments that feel remarkably true to life as conversations go round and around, or arguments contradict themselves.

In this instance though, realism does not make for compelling drama and one is left longing for a spark of energy, some incisive dialogue or a character to reveal themselves to be deeper and more interesting than their initial grey shade might suggest. A dearth of visual style doesn’t especially aid the situation. What the film is missing most though is insight. It is fine to portray a man suffering from malaise in a modern cityscape to your hearts content, but without an attempt to understand him little is offered up to an audience. Nathan is the only character who hints at something a little more exciting but this is soon jettisoned in favour of Ben’s general ennui, which sadly beings to infect those watching the film despite its relatively brisk runtime.

There are some sequences which do engage, Nathan and Ben’s first encounter, or an awkward bus ride with a group of homophobic teenage girls, but these are few and far between and serve only to highlight the lack of interest in what comes between them. By the time a taxi arrives to metaphorically take Ben onwards whilst also offering words of comfort through its wise taxi driver, most people will likely have lost interest in The Comedian.

This review was originally published on 17 October, 2012, as part of our London Film Festival coverage.