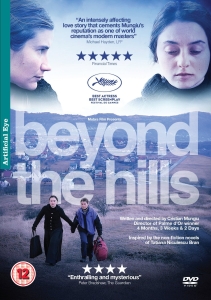 It’s been a remarkable decade for Romanian cinema. While Cristi Puiu and Corneliu Porumboiu both delivered impressive works with The Death of Mr. Lazarescu (2005) and Police, Adjective (2009) respectively, it was arguably Cristian Mungiu’s 2007 Palme d’Or winner 4 Months, 3 Weeks, 2 Days that crystallised the movement and defined the Romanian New Wave. The shadow of Nicolae Ceausescu and brutal communist regime is still a key thematic concern for Mungiu but, with Beyond the Hills (2012), he pushes it to the background, focusing his steely gaze on the lost souls struggling to find purpose in new Romania. 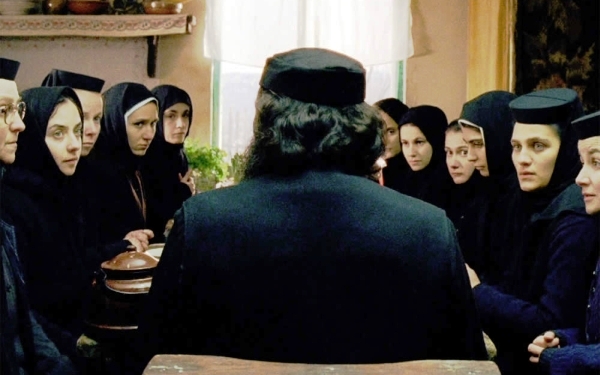 Based on two non-fiction books by Tatiana Niculescu, Beyond the Hills follows Alina (Cristina Flutur) as she returns to her hometown to take her childhood friend Voichita (Cosmina Stratan) back to Germany with her. Both women grew up at the same orphanage, where they forged a strong, ambiguous connection. But, while Alina has been away, Voichita has moved to become a nun in a secluded Orthodox community of women overseen by stern, patriarchal priest (Valeriu Andriuta). Forceful, independent-minded Alina struggles to convince the now meek and pious Voichita to leave with her and, realising she cannot abandon her friend, decides to stay in the monastery with her, causing great upheaval.

In Alina and Voichita, Mungiu embodies the notion of a country at a crossroads after the fall of communism. While Alina took advantage of the freedom and left for Germany, Voichita willingly substituted one form of authoritarianism for another. From these two counterpoints, the director builds a personal story that considers the amplified irrationality of a self-contained conservative community. Beyond the Hills is not about the failure of religion, but about the tyranny of tradition and ritual, where femininity and self-determination represent a threat to the status quo. The film unfolds at a considered, deliberate pace, allowing the audience to become immersed in the daily mundanity of the monastery.

After the slow build comes a harrowing final act which works precisely because of the absorbing character work that precedes it; like Bruno Dumont’s Hors Satan (2011), it becomes a horror devoid of genre convention, freighted with sociopolitical significance. It’s a bracing ending that is – despite the film’s real life echoes – richly allegorical and occurs with the such care and nuance that it prompts serious questions about who the real victims are. This is a deeply powerful piece of work.