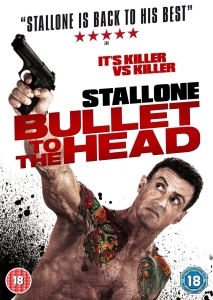 This latest instalment in the post-Expendables renaissance of Sylvester Stallone ticks all the sorts of boxes you might expect from an action star old enough to draw a state pension: there are guns, there are girls, there are explosions, there are rippling, steroid-enhanced muscles, there’s a dunderheaded plot of sorts, there’s even a few choice one-liners. And yet, despite all these key elements dutifully present, Bullet to the Head (2012) rarely rises too far beyond mediocrity. Perhaps it’s down to being lost in translation – the film is an adaptation of the French graphic novel Du plomb dans la tête, providing Stallone with the character name Jimmy Bobo. 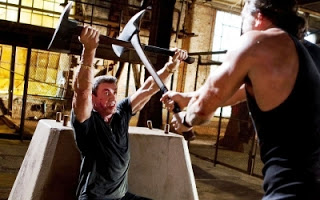 Perhaps in French, the name Jimmy Bobo is tough and masculine, not absurd and cuddly as it is in English. Sadly, it’s rather indicative of the film’s wobbly disconnect with the hearty action vintage to which Stallone clearly aspires. Bobo (seriously, that really is his name) is a hard-as-nails hitman from the wrong side of the tracks, having spent most of his life either in jail or running from the law. We join him on an assassin job with his partner – a job which will unknowingly embroil him in a web of conspiracy and corruption that “goes all the way to the top”. When his partner is murdered, he’s compelled to team up with Asian-American detective Taylor Kwon (Sung Kang), diving headfirst into inter-racial buddy-cop territory.

Stallone and Kang share an awkward and slightly forced chemistry, trading a few spiky barbs where they can, but as with much of this film, it’s all been done before, better. In fact, Stallone is a curiously anchorless presence here. Without the novelty of an Action Hero Greatest Hits Parade, nor the cosy brand familiarity of a Rocky or a Rambo, Hairdye Sly struggles to confidently carry a film alone. He has a wingspan twice the size of any of his co-stars; carries an eternal grimace on that now quite rubbery face of his; and mumbles every line to the point of extreme imperceptibility.

Stallone’s screen charisma is, at once, overwhelming and underwhelming. He’s best, of course, when fighting or shooting, and the action sequences hark back, quite deliberately, to Stallone’s trashy pastel-hewed glory days – muscles, bullets, conflagrations, and – at one point – axes, flying every which way. When the flare-ups come, they are perfectly serviceable, if bloated and derivative. But director Walter Hill – himself responsible for some timelessly entertaining 1980s romps – seems unsure which direction to take with his lumbering lead. Bullet to the Head has a slim comprehension of its inherent ridiculousness, which ultimately proves its middling, unremarkable downfall.