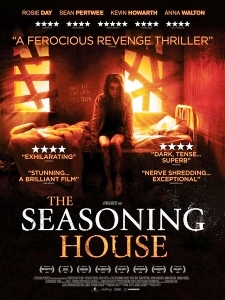 British make-up effects maestro Paul Hyett turns his hand to directing with The Seasoning House (2012), a technically meticulous effort that certainly tries hard, but ultimately can’t quite deliver the goods. Hyett’s near-wordless opening fifteen minutes set a harrowing tone as young deaf mute girl Angel (Rosie Day) traipses around a nightmarish Balkan brothel, assisting the patrons and helping keep the girls doped up and defenceless. In a strikingly-photographed flashback, we learn that Angel was herself taken there after a gang of soldiers, led by Goran (journeyman Sean Pertwee), murdered her mother and sister. 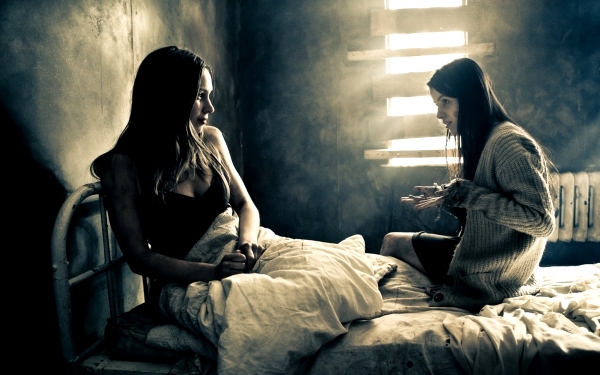 However, when Goran and his detestable squaddie comrades coincidentally come to the brothel looking for some fun, Angel’s anguish returns as she eyes up a chance for bloody vengeance. Whilst Hyett’s The Seasoning House is far from a great film, it certainly holds up well as a visually-lavish calling card for its talented young director. Hyett not only makes RAF Uxbridge convincingly double for the Balkans, but also manages to keep the central and titular location interesting through moments of dynamic camerawork, following Angel as she sneaks through the house’s various nooks and crannies in search of freedom.

The lion’s share of the praise should go to Day, making her feature debut in spectacular fashion with a riveting and challenging performance that asks her to express a lot without saying anything at all. Add to that some physically demanding elements, and you have the makings of a future British scream queen should she so choose. Though the intensity ratchets up considerably in the final act, this is one film that feels a little slow off-the-mark for the most part.

Hyett’s debut also fields out one particularly peculiar logical fallacy in its final few moments, before concluding with an expected – but faintly amusing – final stinger before the credits roll. Grim and composed with the painterly patience one would expect of a make-up artist, but also plodding and at times a bit nonsensical, The Seasoning House neither astounds nor dismays. One feels there’s more to come from a special effects artist whose credits include The Woman in Black and The Descent.