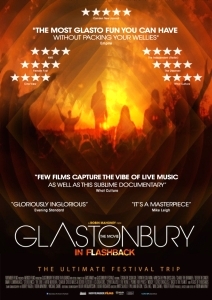 It’s been mere weeks since the 2013 edition of the Glastonbury Festival ended – the cows are not yet back in the hallowed fields of Worthy Farm – but festival fans still shaking off withdrawal symptoms could do worse than Glastonbury: The Movie in Flashback (2012), an affectionate rockumentary of the festival as it was in 1993. A director’s cut of the film first released back in 1996, it is an oddly passive account. Director Robin Mahoney presents the festival on its own terms and generally allows the action to play out organically. There’s no commentary, few interviews, and the only ostensible structure is a day-by-day division.

We follow a few characters (‘Vanessa the Pink Dress Girl”, for example) but otherwise it’s defiantly loose. This certainly sets a spirit-of-the-sixties tone – the use of split-screen is perhaps a rather conspicuous nod to Woodstock (1970), that other doc about that other legendary festival – but the directorial aloofness means we never really get a sense of the history or the purpose of the weekend – something Julien Temple’s 2006 documentary Glastonbury managed pretty comprehensively. Shot on everything from 35mm to Betacam, the filmmakers deftly utilise that particular year’s near-perfect weather to capture the kind of golden hour hazes that would make Gaia herself weep. The sun rising from behind the Stone Circle is a definite highlight. 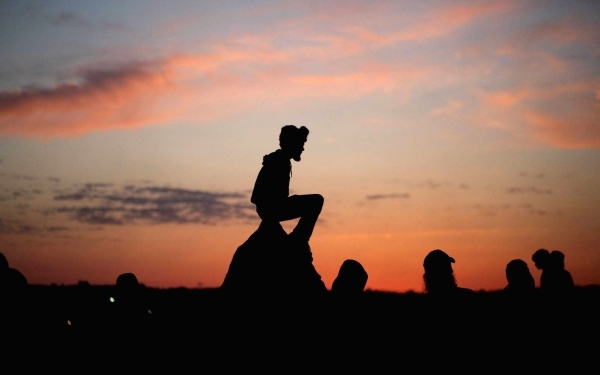 Then there are times when – this being a twentieth anniversary re-release – it shows its age. When witnessing curtain haircuts bobbing along to acid house with a ‘psychedelic trail’ effect added to the picture a la Top of the Pops, proceedings veer into self-parody. And some of the musical artists featured are long-forgotten, with good reason. Was anyone really crying out for an Ozric Tentacles gig to be committed to the posterity of home media? That said, there are a few memorable musical slots, including a headline set from The Orb, and an early appearance from The Verve – with Richard Ashcroft seemingly not yet out of puberty – and the band so unknown at that point that they were not granted backstage camping.

The DVD package offers considerable further value for the Glasto connoisseur, with an arse-numbing twelve hours of footage over four discs. Like the film itself, these are patchy with flashes of excellence. Disc Two has a ‘Follow the Cow’ feature, which provides in-film deleted scenes and other titbits of varying quality: an audio interview with a litter-picking coordinator will be of interest to few, but a ginger hippie with apparently limitless streams of intoxicant-fuelled bullshit provides surprising mirth. Disc Three makes use of the rarely exploited ‘multi-angle’ feature on DVD.

Finally, Disc Four features a litany of further relevant artefacts, from a TV documentary on the Avalon field, to an illuminating set of interviews with some weary locals. Your endurance for all this will depend on your affection for the festival; both film and extras are occasionally something of an ordeal. In fact, Glastonbury: The Movie in Flashback is scrappy, messy, confusing, crowded, and often joyous throughout, which is really quite an accurate realisation of the kind of experience Europe’s most popular music festival can offer.