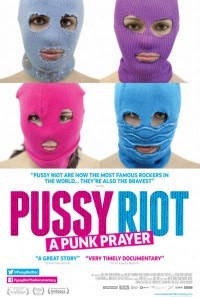 To the uninitiated, they may resemble an attempted ‘swede’ of the feisty girls from Harmony Korine’s Spring Breakers (2012), but the balaclava-clad protagonists of lively documentary Pussy Riot: A Punk Prayer (2013) are anything but. The news in 2011 that Vladimir Putin would seek a third term as President inspired these disillusioned young women to take up arms (well, guitars) and form a brightly attired collective to oppose Putin’s grip on Russian politics. Their provocative brand of performance art landed them in hot water, however, and three of their number were brought up on charges of ‘hooliganism’.

When they first hit the news back in February of 2012, few people had even heard of Pussy Riot: a troupe of fluorescent-masked performance artists inspired by punk-rock and riot girl movements. They took Russia by storm, however, when they barged their way onto the dais at the Cathedral of Christ the Saviour in Moscow and bellowed their latest composition, complete with chorus offering “God shit!” Their show amounted to all of forty seconds before they were yanked from the stage, but enough offence was caused to see them charged and imprisoned awaiting trial. 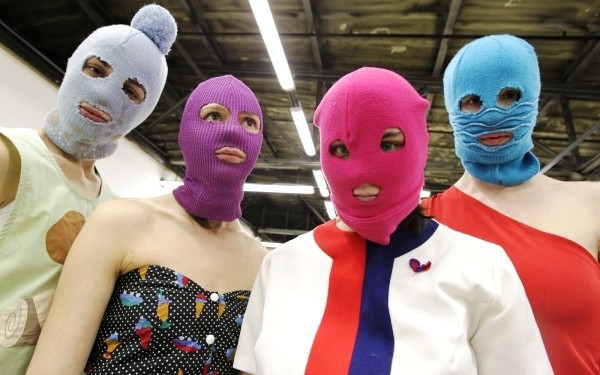 The populace were incandescent with rage. Where the group had intended a critique of the apparent merger of church and state, they were seen as blaspheming against a faith still reeling from Soviet oppression. It’s very clear whose side of the line A Punk Prayer directors are standing on; the girls express regret at any unintentional chagrin, whilst religious protesters claim the incident is as if someone walked “into the heart of Russia and took a shit.” They do have vast support, however, and soon people around the world are calling for Pussy Riot’s release, including Madonna herself. The band’s freedom is ultimately what Mike Lerner and Maxim Pozdorovkin’s fairly conventional documentary is interested in.

The filmmaking duo don’t seek to probe into the causes of Pussy Riot’s defiance, their methods, or provide an in-depth examination of the claims they make. They are along for the ride and know who they’re rooting for, with Putin left as an ominous presence and the girls and their parents front row and centre. Yet, beneath the day-glo masks and crude lyrics gradually appear three thoughtful, passionate young women who attempt to turn the spotlight onto the government. Ultimately, it’s difficult to know who is really on trial.

There’s more advocacy than exhaustive documentary-making on show here, and with footage taken from various sources, Pussy Riot: A Punk Prayer can at times feel somewhat unkempt and unsubtle. It’s a mightily compelling watch, however; a vivid depiction of a flailing Russian democracy and those trying to change it. It’s colourful, absolutely rough around the edges, but also imbued with the very best intentions – much like Pussy Riot themselves.