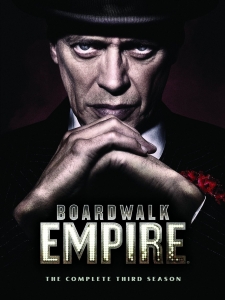 ★★★★★
The third season of Terence Winter and Timothy Van Patten’s epic Prohibition-era crime saga Boardwalk Empire heads to DVD and Blu-ray this week, picking up the narrative a whole 16 months after the cataclysmic finale of Season 2. Steve Buscemi reprises his lead role as bootlegging behemoth Enoch ‘Nucky’ Thompson (a fictionalised take on real-life county treasurer Enoch L. Johnson), the charismatic and cool-headed kingpin in control of coastal tourist trap Atlantic City’s criminal underworld. A vibrant portrait of East Coast life during the roaring twenties, Boardwalk has, arguably, never been better. Despite his position of power, things are starting to go against Nucky.

Thompson’s relationship with ‘old country’ wife Margaret (Kelly Macdonald) is restricted to public niceties following a dispute over money (now donated to the church, for his suns) and he also faces a new threat in the guise of Italian mobster Gyp Rosetti (Emmy Award nominee and grimacing powerhouse Bobby Cannavale), who’s looking to secure a new strategic bulkhead between New York and Atlantic City in order to drain Nucky’s booze business dry. With allies dwindling at an alarming rate and his relationship with younger brother Eli (Shea Whigham) now non-existent, Thompson is forced to roll up his sleeves and get his hands dirty to protect his business and those he loves most. Now at the height of its powers, it’s difficult to think of a made-for-television serial with a cast as strong as Boardwalk’s.

Cannavale’s Rosetti could easily be singled out as a highlight; a rabid dog with a penchant for asphyxiation, TV show antagonists don’t often come as maniacal as this. However, there’s also great warmth to be found in Boardwalk’s third incarnation. Disfigured First World War vet turned gun-for-hire Richard Harrow (a masked Jack Huston) finds friendship in the company of a young orphan, whilst Macdonald’s Margaret feels herself falling for fellow countryman – and Nucky’s right-hand man – Owen Slater (Charlie Cox). It’s the series’ ability to balance the human with the sociopolitical that lends it its addictive quality. As the bullets start to fly, we genuinely care who lives and who dies. And, with a fourth season to air in the States in September, the story is far from over.