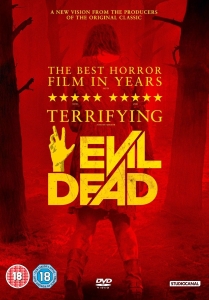 ★★★☆☆
A reboot/rehash/reimagining of Sam Raimi’s 1981 cult horror hit The Evil Dead (so successful at the time as to spawn two manic sequels, both starring the inimitable Bruce Campbell), debut director Fede Alvarez’s Evil Dead (2013) proves to be a surprisingly reverent, if generically constrained, teen splatterfest. Hoping to bridge the gap between its own universe and that of the original outings (three more films are planned: a direct sequel; a sequel to 1992’s Army of Darkness; and an all-encompassing finale), Alvarez’s franchise entry has little of Raimi’s wild humour, but certainly packs in the bloodshed. 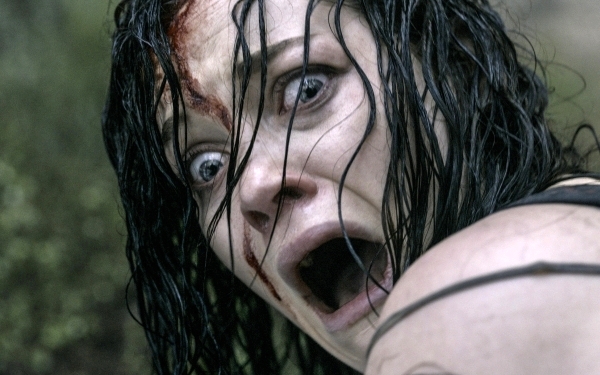 Expanding upon the original film’s set-up, five more naive teenage friends gather at a remote woodland cabin to help one of their party, Mia (TV star Jane Levy), kick her damaging heroin addiction. Mia is joined by brother David (Shiloh Fernandez), his girlfriend Natalie (Elizabeth Blackmore) and their attractive companions Olivia (Jessica Lucas) and Eric (Lou Taylor Pucci). Once inside, the quintet discover all manner of bizarre and unnerving omens, ranging from a cellar full of hanged cats to – most importantly – a ye olde book bound in human skin. Following his keenest instincts, Eric begins to read from the tome, inadvertently unleashing the forces of darkness upon himself and his fellow unsuspecting buddies.

Using Mia’s heroin withdrawal as its lead-in, Alvarez’s Evil Dead does initially first like a bold retelling of a horror hallmark, before gradually settling into the same sickly rhythm as Raimi’s video nasty. A departure from Campbell’s square turned chainsaw-wielding force of good Ash, Levy’s Mia plays both protagonist and antagonist in this incarnation, literally possessed by her own personal demons before taking a final stand against the Necronomicon Ex-Mortis’ legions of evil. The infamous ‘tree rape’ scene returns and is (arguably) more wince-inducing this time around, as are several scenes of brutal self-mutilation as the teens fall one by one to the book’s sinister spell.

The main drawback to this whole exercise in modern horror is that Alvarez’s enjoyable debut will forever be tethered to producer Raimi’s beloved founding trilogy. Were this a simple remake of a lesser ‘cabin in the woods’ frightener – and let’s be honest, they’ve been ten-a-penny over the last forty or so years – we might now be talking about the Uruguayan as the next big thing. As it is, however, this new Evil Dead is more spirited, gruesome homage than genuine reboot, appealing to younger gorehounds whilst perhaps alienating itself from diehard fans looking for the franchise’s trademark dark humour amongst the buckets of bloody effluent.