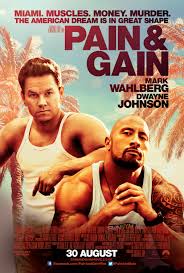 While numerous big-budget directors have been busy channelling the spirit of Michael Bay in the summer of 2013, the man himself has made his smallest film yet; and it turns out to be one of the strangest blockbusters in years. Pain & Gain (2013) is an open book; how audiences respond to it will depend entirely on how much belief one puts in Bay’s ability to be more than simply the soulless don of destruction. The picture could easily be read as a declamatory statement of repentance; a crisis of directorial identity writ large. It could also be a gruesomely inadvertent piece of self-parody. Either way, it demands attention. 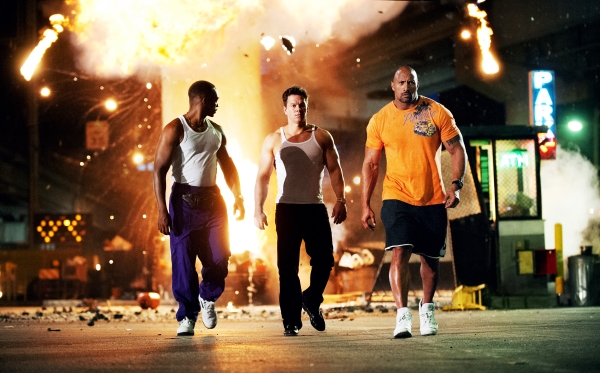 Pain & Gain tells the improbable true story of Miami personal trainer and ex-con Daniel Lugo (Mark Wahlberg), a man to whom physical perfection is synonymous with success. With an unwavering belief in the snake oil of motivational speakers, Lugo decides he’s worked too hard and too long for little reward. He consequently recruits two friends, Paul (Dwayne Johnson) and Adrian (Anthony Mackie), to help him rob shady businessman Victor Kershaw (Tony Shaloub) of all his possessions. The question of authorial intent hangs heavy over Pain & Gain. Does Bay intend the picture to be a savage indictment of the American Dream, or is that just an accidental by-product of his bombastic chronicle of misdeeds?

The opening voiceover would suggest the former. Bay appears to be mourning the way meritocracy has been replaced by entitlement in the US. Self-help slogans and bon mots are ascribed a sense of theological importance by Daniel, and the image of success is as vital as success itself. Bay also has a lot of fun mocking the gang’s drive to become Adonic ideals. The raging masculinity is self-consciously rampant, but the director keeps undercutting it with jibes at the trio’s stupidity or – God forbid – sexual prowess. Bay’s cold militarist aesthetic is perversely appropriate in Pain & Gain; the men treat themselves as hardware they can simply build up, so the film treats them as such.

The final act of Pain & Gain is a frantic descent into Hell as the male triumvirate attempt to cover up their heinous crime. Bay (naturally) ramps up the pace, pummelling his audience with an assault of garish visual flourishes. He may go out with a deranged, gaudy bang but, crucially, he doesn’t lose sight of his central thesis. There’s something rotten in the state of Florida; it could be the American Dream or it could be Bay himself. Whatever the answer, Pain & Gain simply needs to be seen to be believed.