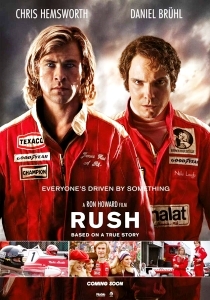 Hollywood director Ron Howard loves a true story, but has also previously shown a penchant for the sentimental. Fortunately, in his thrilling new F1 drama Rush (2013), he abandons the saccharine motifs of his past works, creating one of this year’s most sensory cinematic experiences. Howard and British screenwriter Peter Morgan unite once more to throw us full throttle into the 1970s heyday of Formula One racing. We begin with playboy James Hunt (Chris Hemsworth) rapidly rising through the ranks of F3, bedding any attractive woman that crosses his path and ‘sampling’ plenty of expensive bubbly along the beaten track.

Lurking on the sidelines, however, is ascending Austrian star Niki Lauda (Daniel Brühl) – a very different kind of character altogether – whose calculated approach to racing earns him a place ahead of Hunt in F1. What follows is the dynamic duel between the contrasting drivers which culminated in the tragic moment in the infamous Nürburgring crash of 1976, which left Lauda with third-degree burns all over his body. Yet amazingly for Lauda, this is not where the story ends, as he went on to race just six week later. 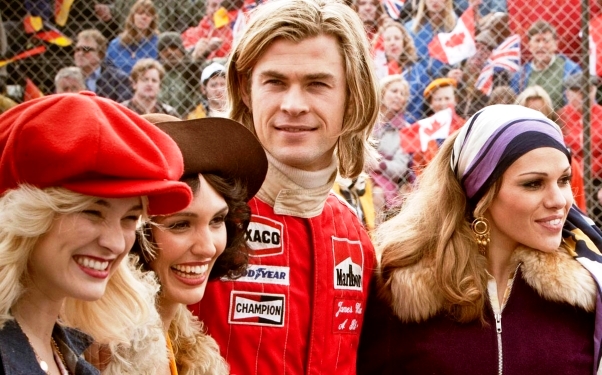 Such feats of human endurance are the building blocks of all good dramas – not just those related to sport. Woven into the tapestry of Rush is a monumental battle against undeniable odds and two radically opposed but intriguing characters, all neatly wrapped up with a visual bow of 70s-infused grain. Lauda makes for a wonderfully unlikely hero. He isn’t blessed with the good looks of Hunt; he’s rude and he’s also self-obsessed. For him, the sport is everything. This contrast is beautifully handled as we see ladies’ man Hunt throwing caution to the wind at every turn, whilst Lauda gives everything he has to each race (captured in one scene where Lauda deconstructs his Ferrari 312 T2, rebuilding it by hand).

Despite what the marketing would have you believe, Rush isn’t a biopic of the charismatic Hunt, with Hemsworth by no means the star of the show. Of course, his boyish good looks and rippling torso draw in a certain crowd (especially with Marvel’s second ‘Phase Two’ entry Thor: The Dark World just around the corner), but the real gem of Howard’s latest is undoubtedly Brühl. His superb ability to not just imitate Lauda’s aggressive arrogance, but also to develop the real-life figure into a rounded screen character in his own right, is surely one of his finest performances to date.

This compelling account is certainty not for the faint-hearted thanks to its incredibly immersive driving sequences and an extraordinarily difficult scene where Lauda’s scorched lungs are literally ‘vacuum cleaned’ in order to save his life. Importantly, though, whilst Howard provides plenty for petrol-heads to coo over, Rush is far more than just a homage to the former heroes of F1; it’s a well-plotted, compelling drama that transcends the very sport it depicts. Set in another era, this could easily have been a story of two crusading knights from antiquity, upholding the divine rights of life, death and, above all, glory.