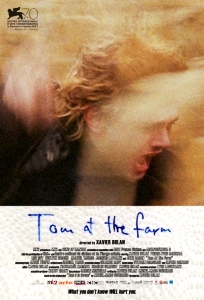 Filmmaking prodigy Xavier Dolan directs and stars in Venice pick Tom at the Farm (2013), an absurd, blackly funny thriller set in rural Canada and based on the play by Michel Marc Bouchard. Tom (Dolan) is a dishwater-blonde city boy in an oversized leather jacket who drives from Montreal into the rainy countryside to attend his lover’s funeral. Stopping at the farm where his partner grew up, he first meets his boyfriend’s mother Agathe (Lise Roy), who knows nothing of his relationship or her son’s homosexuality – an ignorance which Tom maintains. However, Agathe’s other son Francis (Pierre-Yves Cardinal) is suspicious. 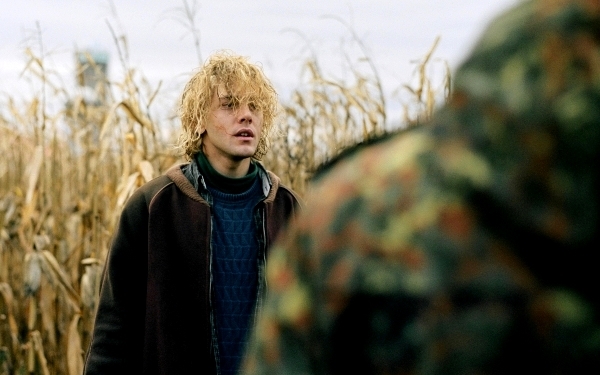 Francis insists that the deception goes further, with Tom being coerced and then violently bullied into embroidering tales of an invented girlfriend, Sarah, and staying on at the farm for a few days to please Agathe. Days become weeks as Tom is trapped and beaten by the psychopathic, tango-dancing Francis, yet he’s also trapped by his own grief and a growing sadomasochistic attachment to his lover’s brother. At the very beginning of Tom at the Farm, our titular protagonist smashes his sat nav, and there’s a sense that the film likewise despises taking an easy, straightforward route, whilst Gabriel Yared’s richly orchestral score drips and swoops with the luxurious delirium of Bernard Hermann circa 1958’s Vertigo.

Further Hitchcockian influence can be seen in the utilisation of creaking rooms and lonely farms, as well as the familial madness of both Francis and the domineering Agathe; by turns needy and indeed violent, occasionally bursting into sharp, maniacal laughter. There’s also more than a dash of early Polanski in the film’s sense of claustrophobia and lurking menace, but Dolan adds his own touches of broader comedy with tango lessons in a barn, filthy talk in the kitchen and pop songs at the funeral. Thankfully, Tom at the Farm’s slide into absurdity never flops into out-and-out fantasy, and Dolan is careful to ground his latest effort, sometimes literally in the mud and earth of the land.

Tom’s growing idealisation of the pastoral life – “When a dog barks, I really hear it” – is in itself called into question, if not outright ridiculed when, after opining after the real things in life, he walks into a bar called ‘The Real Thing’. With his fourth feature completed at the tender age of just 24, Dolan has established a reputation for himself as a director of original and entertaining cinema. Tom at the Farm is confidently delivered, its shots composed with a careful eye, and its occasional stylistic flourish – ratios change in moments of danger, for instance – hint at someone pushing at the possibilities of cinema, if not quite breaking through.