Once again, it’s time for DVD and Blu-ray audiences to keep their appointment with The Wicker Man (1973) following its ‘Final Cut’ rerelease earlier this month. It’s an offbeat masterpiece that reveals the dark heart of Britain through the perennial tension between social progress and the burden of the past. The film works on several levels; it’s at once a witty, eccentric horror, as well as a deeply serious exploration of the tangled narratives of the country’s history. Watching Robin Hardy’s film in 2013 is a bittersweet affair, a reminder of a time when British horror was genuinely dangerous and unpredictable. 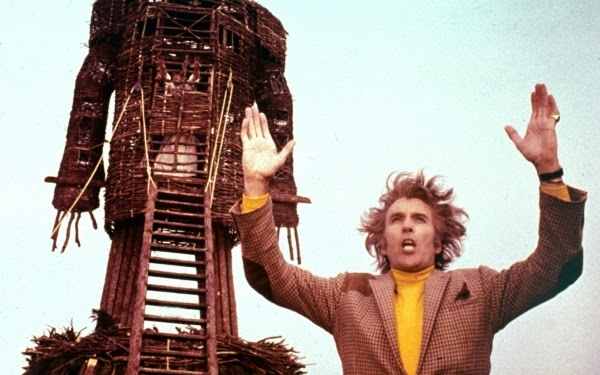 The film follows uptight, officious policeman Sergeant Howie (Edward Woodward) as he visits a small island off the Scottish mainland to investigate the disappearance of young girl Rowan Morrison. The inhabitants belong a pagan cult led by the studious and enigmatic Lord Summerisle (Christopher Lee). The liberated way of life on the island is a threat to Howie and, as he gets closer to solving the case, he’s drawn into a broader scheme beyond his wildest dreams. Even taken purely at face value, The Wicker Man is an undeniably remarkable work. Even after all these years, it still moves with an endearing creakiness and is full of unexpected grace notes, as well as some genuinely unsettling moments.

Though Howie and Summerisle are polar opposites, the line between heroes and villains is tenuous and is more dependent on particular audience sensibilities that one would expect. The genius of the film is in presenting a clash of ideals in such a way that one could comfortably fall on either side or, indeed, on both. Hardy’s finest hour operates as a slightly skewed stock-take of the liberalisation of the sixties. Howie is a man out of time; a dour Christian authority figure undermined by the more radical values of the island. But the inhabitants are not creeping revolutionaries; they are settled into a way of life and are there to stay.

The policeman’s principal investigative failure stems from his missionary zeal and unwillingness to engage with the people on their own terms; it’s a surprisingly persuasive way to look at England in the sixties. The Wicker Man recognises the violence in the soil; the indomitable shadow cast by our pagan forefathers. The much-vaunted image of an innocuous rural paradise is replaced by a more threatening vision of the countryside. Britain is a place of complex contradictions, and the picture tells us more about that than any of the films director Mike Figgis dismissively called “kitsch ‘n’ sink” ever could. From the irreverence to the darkness; this is England.