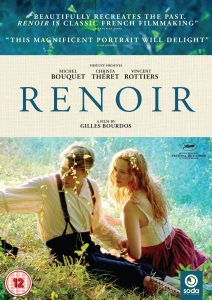 Renoir (2012), Gilles Bourdos’ sumptuous portrait of the French master’s final years and his filmmaker son Jean’s first creative stirrings, is big on atmosphere but lacks dramatic tension. Father (Michel Bouquet) and son (Vincent Rottiers) fall for the same woman, Andrée Heuschling (Christa Theret), who becomes Jean’s wife and the leading actress in his early films. Set on the Cote d’Azur, Renoir opens with Andrée arriving on the elderly artist’s doorstep claiming to be his next model. Suffering from advanced arthritis and mourning the recent loss of his wife, Renoir also employs a household of women to look after him. 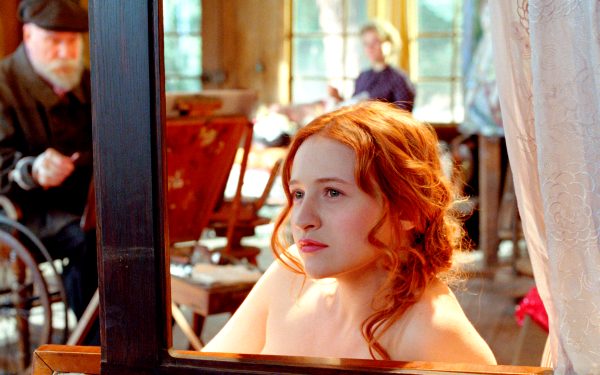 The women cook and clean, tenderly dress the French artist’s ravaged hands, mix his paints and ferry him between house and terrace or from riverbank to orchard. Revitalised by Andrée’s sensuality, Renoir starts painting nudes again. By contrast his young son, Coco (Thomas Doret), is largely ignored. He wanders aimlessly around the family’s acres of land; angry, bitter and disillusioned about his aged father and missing his mother and brothers. It’s 1915 and although the First World War seems far away from this Mediterranean idyll, Coco’s two eldest brothers are army officers on the northern front. When Jean unexpectedly arrives home on sick leave, he thus throws the household’s fragile equilibrium into disarray.

Bourdos’ intentions aren’t always clear. Is Renoir supposed to be a psychologically complex examination of a love triangle involving father and son? Or is it about artists and their muse? Bourdos is clearly interested in exploring the two men’s obsession with and exploitation of Andrée – both are overtly attracted to her – and yet most of the time her character is posing naked or flirting with other men so she is persistently sexually objectified by the camera. Equally, the terrible, emotional scars of war are only ever hinted at. Two memorable moments are almost asides. The first is when Andrée clashes with the other servants who chide her for getting airs above her station.

The second comes towards the end, when Jean’s older brother warns him about becoming involved in film because “cinema isn’t for us French. It’s entertainment for the masses. Our artistic heritage is too old, too heavy.” Admittedly, women did not have it easy and Bourdos highlights the inherent sexism of the era. But flesh and carnal pleasures are Renoir’s dominant themes and, like its luscious setting, these pall after a while. The acting is superb and Ping Bin Lee’s glorious cinematography is a joy but I found myself yearning for more conflict, something “heavy”, and a heroine who uses her brains rather than her sexuality to get what she wants.