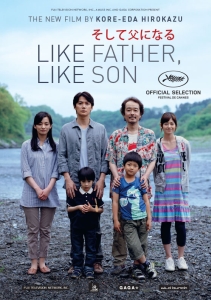 Following his sweet-natured children’s film I Wish (2011), which was released to great acclaim earlier this year, Hirokazu Kore-eda’s Like Father, Like Son (2013) is another great work from one of Japan’s greatest contemporary directors. While the former saw events from children’s perspectives, the latter unfolds from the adults’ points of view. It’s a moving but unsentimental story of two sets of parents discovering they were given the wrong babies at the hospital six years earlier. Keita’s parents, Ryoto (Masaharu Fukuyama) and Midori (Machiko Ono), are wealthy, his mother is loving but his father is distant.

Yudai (Lily Franky) and his wife (Riri Furanki) on the other hand, are poorer but more caring, relaxed parents. The film follows the two families as they attempt to phase in a painful switch of the children. While Kore-eda shows each side of the story, Like Father, Like Son is clearly about Masaharu Fukuyama’s Ryoto coming to terms with what fatherhood means. It’s a truly heartbreaking picture, refreshing in its frankness but with its own unguarded power.

It’s remarkable that the director still manages to weave very personal issues through broader national and sociological notions. Class is a pertinent issue, as is the modernisation of parenting, but their inclusions are subtle, complementing the drama rather than bearing down on it. The final moments also carry a real emotional wallop; another triumph for one of the best filmmakers working today. Last week, we spoke with Kore-eda this week to discuss his latest offering

Craig Williams: Where did the idea come from?

Hirokazu Kore-eda: I was initially approached by Fukuyama who wanted to work with me, so we were trying to find a project for us to do together. At that time, my daughter was three and I was experiencing the dilemma about what being a father means was an issue close to my heart. The relationship between a father and a child is possibly not as strong as that between a mother and a child. I was away a lot with my work and not spending as much time with my daughter as I would’ve liked. I was thinking about all these issues at the time, so I think it was a good project for me to address some the problems I was experiencing.

CW: I Wish sees events from the children’s point of view and Like Father, Like Son is from the adults’ perspective. Which did you find easier?

HK: Both are difficult in different ways. I Wish was about childhood and so I was trying to recall my own childhood and how I felt at that age. It was difficult to dig out my past in that way; there was an inevitable distance. But with Like Father, Like Son I was a lot closer to that experience. It was therefore hard to be objective about what the protagonist goes through. So the first was too distant and the second was too close; that’s where the difficulties lay.

CW: You get such extraordinary, naturalistic performances from children. What’s your process when you direct them?

HK: I don’t give the children scripts. I’ve made this a policy for the last ten years. The audition process is very important; I pick up on the way they speak and the phrases they use. I try to get to know the children themselves and how they say things. I then try and use what I pick up in the films. Once I’ve worked out the cast, it’s up to me to try and use what they already have when writing the screenplay, rather than me having to ask them to do what I want them to do. That process helps.

CW: Finally, your films are specifically about Japanese families, but the sentiments and experiences are applicable to any family. Is that something you deliberately aim for?