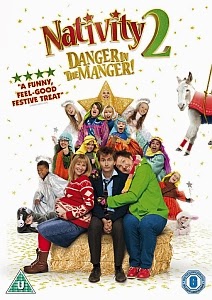 When Debbie Isitt’s original Nativity! was released back in 2009, Martin Freeman and The Hobbit hadn’t even been mentioned together in the same sentence. Now, several years after he and David Tennant were both attached to the role of Bilbo Baggins, Martin is off strolling through the mountains of Middle-earth while the former Doctor Who star is stuck halfway up a Welsh cliff with a bunch of children and a flying donkey in Nativity 2: Danger in the Manger! (2012). Tennant plays Mr. Peterson, drafted in to replace Freeman’s lovable teacher, whose retirement has left his lively Class 7 without any adult supervision. 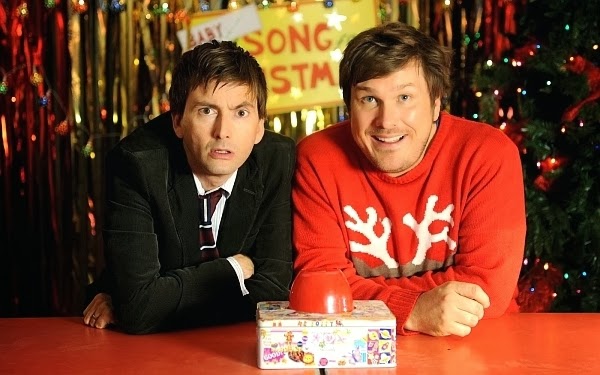 Tennant also plays his own brother, Roderick Peterson, a snobby musician and choirmaster extraordinaire. So when Mr. Poppy (a returning Marc Wootton) decides to go behind headmistress Mrs. Bevan’s (Pam Ferris) back and enter the national ‘Song for Christmas’ contest, you can pretty much guess what happens. Whilst the words ‘David Tennant plays a pair of identical twins’ are enough to send shivers down anyone’s stockings, Danger in the Manger! thankfully remembers that this isn’t about the grown-ups: it’s about the kids. This time around, we do know what to expect and things start to feel a more than a little bit forced. Buses that turn into boats? X Factor audition spoofs? A spot of white water rafting?

You can say one thing about Isitt and energetic man-child Wootton, as assistant teacher Mr. Poppy – they never know when to stop. And so we wind up on top of that Welsh cliff with Ofsted’s worst nightmare: “Donkeys can fly!” Poppy cries as the children begin to look worried. “Isn’t that right, Mr. Peterson?” It’s not all bad, in truth. Much like an exhausted babysitter, somewhere between the 15th and 16th joke about poo your resistance may well begin to snap. The infamous Bob (Ben Wilby) returns, complete with his scarily impressive pre-pubescent body-popping, the musical numbers (co-written by Isitt and Nick Ager) are infectious, and Tennant’s hammy villain alter-ego almost makes up for his forgettable lead.

While Mr. Poppy is shouting about Christmas miracles, it’s worth trying to remember that this franchise isn’t aimed, in any discernible way, at the adult market – almost refreshing in the age of DreamWorks and Pixar. When you’re not feeling terrified for their mental well-being, their improvised hijinks, shot Outnumbered-style, are occasionally quite adorable – particularly during the all-singing finale, hosted by a genuinely funny Jessica Hynes. Many adults will predictably find themselves crying out for The Desolation of Smaug, but if you’re under the age of ten, Danger in the Manger! might just be enough to get you in the festive spirit – flying donkey and all.