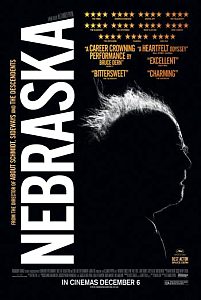 ★★★★☆
Back from his Hawaiian Island odyssey with George Clooney and The Descendants (2011), US filmmaker Alexander Payne (Election) returns to the American heartland for Nebraska (2013), a stripped-down family drama set within the sparsely populated state. Shot in colour digital to facilitate international television sales before reverting back to an intended monochrome aesthetic for general release, Nebraska serves as a touching obituary to a long-departed era; one that the film’s grizzled protagonist, Woody (an Oscar-tipped Bruce Dern), seems unable to leave behind despite his son’s (Will Forte) fervent protestations. 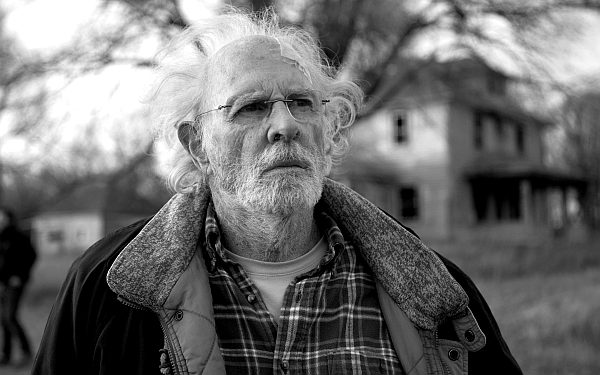 We’re first introduced to the obstinate Woody as he wanders along the highway, convinced by a letter that arrived through the post that he is the rightful beneficiary of a million-dollar lottery sweepstake. Undeterred by the nagging objections of sons David (Forte), Ross (Breaking Bad’s Bob Odenkirk) and long-suffering wife Kate (a marvellous June Squibb), Woody hits the road once again, this time with David in tow. To claim his fortune, Woody and his youngest must travel to the sweepstake company’s office in Nebraska, a 750-mile trip that will see the pair return to the family’s hometown of Hawthorne. However, once there, word of Woody’s fortune makes him a returning hero – and a prime target for cold-hearted exploitation.

As the early awards season buzz and this year’s Cannes Best Actor prize would suggest, it’s Dern who steals the limelight here. As with the casting of an ageing Jack Nicholson to great effect in 2002’s About Schmidt, Payne once again illustrates an affinity with actors enjoying the twilight years of their careers. Dern’s Woody isn’t a muddy-coddled, sentimentalised old codger, but rather a flawed and frail artefact from a time that the 21st century – with its flat-screen televisions and surround sound systems (which Forte’s David so manfully hawks in the opening scenes) – has chosen to forget. As such, an air of melancholy permeates Payne’s customary comic diversions, with lost denchers and old feuds as tragic as they are tickling.

There’s something incredibly admirable about Payne’s filmmaking approach. He insists that his works turn a profit, but only enough that he may continue with the kinds of projects he enjoys most. Those that decried the more commercially-driven melodrama of The Descendants are now presented with the indie-spirited fruits of his past labour; a deeply personal, emotionally resonant and – let’s not forget – richly entertaining road movie with several award-worthy performances (Dern, Squibb) at its deceptively warm heart. Whilst Nebraska may not reach the exceptional heights of his debut feature Election or the comparable Sideways, it’s still an extremely well-crafted entry in Payne’s increasingly impressive directorial résumé.