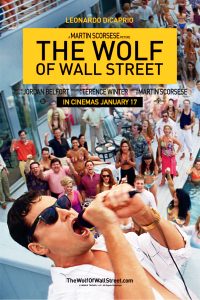 Opening to a drug-addled Leonardo DiCaprio tossing a dwarf, Martin Scorsese’s raunchy, ribald and gloriously satirical attack on American hedonism, The Wolf of Wall Street (2013), is a feast of such vulgar delights that it would make Bacchus blush. The tone, whilst distinctly of the director’s oeuvre, possesses a lithe energy as yet unseen, telling as it does the true story of one of Wall Street’s most notorious stockbrokers, Jordan ‘The Wolf’ Belfort (DiCaprio). Schooled by orange, leather-skinned, chest-beating broker Mark Hanna (Matthew McConaughey, on top form), Belfort’s savage and unwavering appetite for money is kindled.

Belfort begins his ascent, only to be stopped in his wake by the collapse of one of America’s oldest Wall Street firms, L.F. Rothschild, in the crash of 1987. With a growing taste for life’s fineries (including a dependency on a medley of drugs that would turn Keith Richards’ stomach and enough prostitutes to make Casanova question his lifestyle), Belfort will stop at nothing to have it all. Returning to his home borough of Queens, the Wolf discovers the penny stocks/pink sheets which were unregulated (of sorts), with a higher commission for the broker. After making a quick thousand dollars or two, Jordan forms the dubious brokerage Stratton Oakmont (its emblem a thickly-maned lion) with an assortment of unsavoury hustlers. 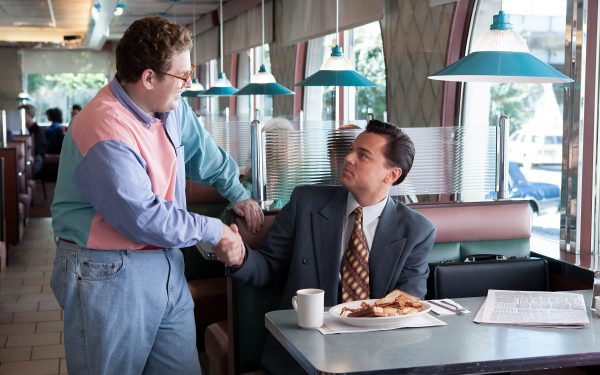 Among these crooks is the florescent-toothed Donnie Azoff (Jonah Hill) who, together with his old pal Jordan, swindles and steals his way to the top. Belfort’s rise is nothing short of meteoric; he is, after all, a man who by his 26th birthday had made $49 million. Buying mansions, luxury yachts and helicopters, we see DiCaprio’s obscene yet always watchable Belfort rubbing, sniffing and grinding his way into inglorious fame. Along the way he even marries trophy wife Naomi Lapaglia (Margot Robbie), whose English aunt (our own Joanna Lumley) would become a ‘rat’ for laundering money into the Wolf’s Swiss accountant’s hands. However, as the Icarus of legend can testify, fly too close to the sun and your wings will inevitably melt.

From beginning to end, DiCaprio’s Oscar-worthy performance as Belfort sees a streetwise kid with ambition transform into an almost demonic salesman with the patter of Billy Graham and the morality of Machiavelli; a character so full of greed that he makes Gordon Gecko looks like St. Francis of Assisi. The Sopranos and Boardwalk Empire screenwriter Terence Winter crafts a pithy script, laced with salacious one-liners – including several superb DiCaprio to-screen explanations of the mechanism of economics – that always trawl off into lewd and crude accounts of the previous night’s encounters with high and low-class hookers.

Scorsese – and his lupine lothario protagonist – both know that we aren’t interested in the finer details of how Belfort did what he did, but what happened once he’d made his fortune. Marty shows Wall Street, and indeed finance, at its worst; a jungle full of growling, macho creatures in electric blue suits, all with class-A drug addictions. The Wolf of Wall Street does feel a little like a retread of Goodfellas (1990) and Casino (1995), as well as Oliver Stone’s Wall Street (1987), portraying Belfort’s firm more like a mob racket than a suited-and-boot outfit. What it does do, however, is blackly revel in our protagonist’s narcissism, cutting to the quick of the fugazi of finance.