It’s indomitable personalities and powerhouse voices that shine through in Morgan Neville’s enjoyable ode to stellar backing singers, 20 Feet from Stardom (2013). The film scooped the Oscar for Best Documentary at last month’s star-studded ceremony and features exactly the blend of glamour, sentiment and toe-tapping music that one might expect to appeal to Academy voters. There may be a more thought-provoking exploration lurking off stage, but it’s satisfying to see superstars like Mick Jagger and Bruce Springsteen expressing their appreciation and admiration for the less recognisable – but equally deserving – faces of Merry Clayton, Darlene Love et al. 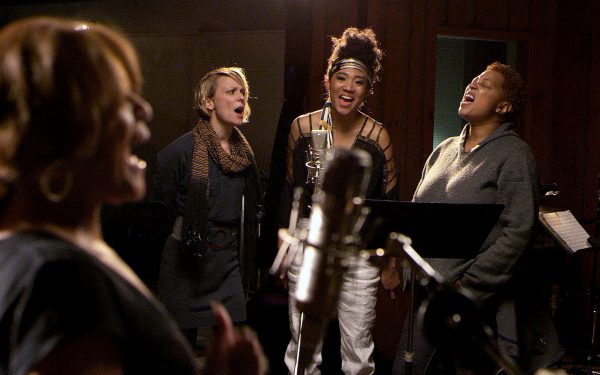 For the director’s part, it’s very much a case of winding his subject’s up and letting them go as his film charts the rise of backing vocalists throughout the sixties and seventies from the mouths of those standing just next to the hallowed spotlight. Almost unanimously graduating from active church choirs, Clayton, Love, Lisa Fischer, Táta Vega and many others transformed popular music through their unifying harmonies and sensational voices on tracks from artists as diverse as Ray Charles, the ‘Thin White Duke’ David Bowie and the hellraising Rolling Stones. Through a blend of talking head interviews and archive footage, Neville’s doc is a medley of each singer’s personal and professional journeys right through to the present day.

At its most interesting, 20 Feet from Stardom’s exploration feels like one looking at a musical subculture, touching on the origins of the craft in the church and the call-and-response style as a lead singer preaching to their flock. Elsewhere, Neville shows passing interests in the Civil Rights Movement and the place of strong – and more importantly, irreplaceable – African American women within it. On the other side of the coin, however, is the recognition that these exceptional talents have not received and the difficulties they faced in battling to obtain it. Chronicled in particular is Love’s struggle to free herself from the grip of infamous record producer Phil Spector, who repeatedly used her voice but not he name.

When the doc reaches its third act, it naturally needs a positive climax and this is where all of the interesting, if disparate, elements are forgotten in favour of hammering home its underlying messages about nurturing talent and never giving up on your dreams. It makes for dissatisfying conclusion after an opening hour filled with promise. Luckily, the parade of incredible women, the stream of songs you won’t believe they sang on, and those irresistible voices belting out keep the rhythm going through the schmaltz, even if the conductor seems to have dropped his hymn book. In the end, though, 20 Feet from Stardom has allowed these undervalued women to move twenty feet closer, and who can argue with that?