“Without it, life means nothing” according to a quote that fills the screen in the opening moments of British director Shan Khan’s twisting London-set thriller, Honour (2014). Attempting to straddle the potentially conflicting identities of cultural expose and nerve-shredding cat-and-mouse chase, it revolves around the horrifying practice of so called ‘honour-killings’ in Muslim communities and families. Reportedly on the rise here in the UK, Khan’s film seeks to shine a light onto these dark slayings whilst providing popcorn entertaining. The ambition is certainly a noble one, but sadly it does not quite work on this occasion, with both message and tension hamstrung by unconvincing characters. 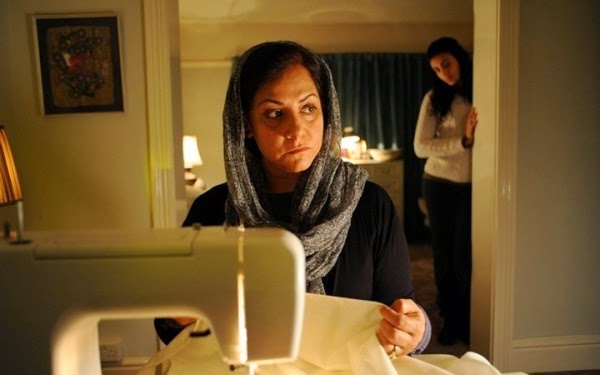 Khan’s film opens with what appears to be the brutal and unprovoked murder of a young Muslim woman by her immediate family. The anglicised Mona (Aiysha Hart) proves the MacGuffin in this deceptive narrative that shifts back and forth through time, adding context and elaboration on a deadly game of cat and mouse. Paddy Considine provides a recognisable face for audiences to cling to as a nameless former-National Front ex-con who makes a living as a disreputable bounty hunter. Mona’s family are in need of his kind of scum when they learn of her relationship with a Punjabi man and she subsequently goes AWOL. The icy matriarch, played by Harvey Virdi, along with her bullish son, Kasim (Faraz Ayub), enlist Considine’s bottom feeder to find and dispose of their family shame before she can escape.

After an exposition that hints at taut social realism – albeit painted in broad strokes – the introduction of Considine’s frankly never believable tracker gives a better suggestion at the film’s tired, genre-bound destination. A man with a troubled past searching (dare one say it) for redemption may just find it in the woman for whom he is literally searching. As the stakes are raised, so does the mania of Kasim, whom Ayub imbues with an unnerving edge in quieter moments but struggles to maintain as things escalate. By the time the action reaches its apex, things have descended into full-tilt melodrama and the chill of the original premise is all but gone. There are some things to recommend, however.

Both Ayub and Hart are solid for the most part – though neither is quite as convincing by the conclusion having both morphed significantly – and Considine is competent, even though he’s largely on autopilot. First-time writer and director Khan also shows promise behind the camera, comfortable shooting both dialogue and action with a couple of set pieces coming together in suitably slick fashion. Sadly, amidst the gunplay the original intention is obscured and – besides a couple of thickly laid on scenes – little headway is made in understanding the murderous culture at the crux of Honour. Still, it may still make for diverting weekend viewing now that it’s hit DVD shelves.