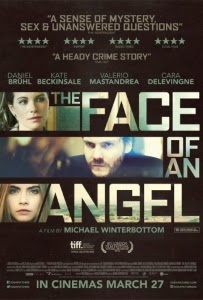 Watching Michael Winterbottom’s The Face of an Angel (2014), it’s fascinating to try to decipher just how autobiographical it actually it is. An eclectic and deeply interesting homegrown director, Winterbottom’s films have often been imbued with a documentary rigour and that notion is explored here through a fictional handling of the infamous murder of British student Meredith Kercher in Perugia in 2007. Rather than concentrating on the outcome of the murder trial – which took another twist earlier in the year – this is more of a study of a filmmaker attempting to adapt real-life events for cinema. It makes for riveting viewing, even if The Face of an Angel culminates in something that never quite lives up to its potential.

German actor Daniel Brühl (Goodbye Lenin) plays Thomas, a recently divorced film director dispatched to Sienna to fashion a feature about the murder of Elizabeth Pryce (Sai Bennett) and the trail of Jessica Fuller (Genevieve Gaunt). His guide through this labyrinthine case – and city – is American journalist Simone (Kate Beckinsale), who authored the book that provides the film’s title. As Thomas rails against the amorality of the press corps, his grip on reality begins to waver and he slides into a cocaine habit amidst a growing obsession with the work of Dante and an attachment to pretty barmaid Melanie (Cara Delevingne). Weighing heavily on Thomas are questions over how a truthful vision can be hewn from a story with so many unanswered questions and why the victim has been left in the shadow of the accused.

It’s hard not to imagine Winterbottom encountering similar quandaries when developing the narrative especially when that both character and creator seem uninterested in a whodunit. There’s also a large degree of metatextual dialogue that clearly pre-empts real world critical analysis. At one point, Thomas is warned not to lose sight of the actual story and give too much attention to “a middle-aged man who’s lost his way”. Equally, Thomas (or is that Winterbottom?) describes a desire to create a story based on fact, but to also transcend that. Of course, just because the director addresses potential gripes in the film, that doesn’t mean that they become any less problematic and the mystery remains an elephant in every room. There’s much to admire, though. Sienna is cast in beautiful but appropriately gloomy shades as to represent a journey into Dante’s Hell – Melanie is even engaged to Thomas, Virgil-like, through its cobbled alleyways.

The performances are all strong, particularly Brühl’s, and the scene’s handling press-gaggles, production company bigwigs, while Thomas’ nightmarish visions are undeniably well-executed. Beside her guide position, Melanie’s primary function is to represent the deceased young woman and provoke an emotional response to the death of the neglected victim. How successful this is will depend largely on individual audience reactions. Yet regardless, Winterbottom’s The Face of an Angel makes for compelling viewing, painting an arresting character portrait even if it avoids the direct engagement with the original (and much-discussed) crime that some people may have been expecting.