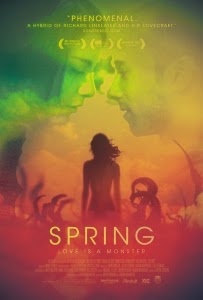 Variations of metamorphoses are the underlying catalysts in Justin Benson and Aaron Moorhead’s sophomore feature, Spring (2014). It plays like a reinvention of Curtis Harrington’s Night Tide (1961) inflected with modern indie sensibilities and viewed through a burnished Instagram filter. Much like Dennis Hopper’s Johnny in that film, Spring‘s Evan (Lou Taylor Pucci) is a young American with little experience of the wider world enchanted by a mysterious and exotic woman. Evan’s flown the nest of his recently deceased mother to grieve overlooking a picturesque Italian coastline. Capturing his attention more than the landscape is the beautiful, enigmatic Louise (Nadia Hilker).

The dark secret she hides transforms their innocuous holiday romance into something altogether more perilous and enduring. In Night Tide the sea lapped prominently at the actions edge, beckoning characters into the abyss of its overt horror tropes. For Benson and Moorhead it enjoys a more nebulous allegorical role. Thematic explorations of the relationship between the scientific and supernatural feel like waves sloshing over the stony beach, while the ocean’s visually infinite expanse is explicitly invoked by Louise in frank discussions of the couple’s future. Long before that, however, they must get to know one another and it’s in these exchanges that many people have caught flavours of Linklater’s Before Sunrise (1995).

It’s a slightly flattering comparison, but gives a sense of the affectionate courtship that unfurls across the narrative and comes back to the discussions of whether this is merely a fling in the sun or something altogether deeper. Although they can hardly match the repartee of Hawke and Delpy, Taylor Pucci and Hilker do a commendable job of selling these two souls, adrift in very different seas. Evan is a likable and easy-going guy, profoundly sad but a romantic at heart and Taylor Pucci imbues him with a shy awkwardness than betrays both. Hilker’s Louise is sultry, sexy and initially hungry only for physical intimacy liaison but there’s a great deal more to her than meets the eye. For one, time is interminable while the other freshly feels the pain inflicted by its arrow. When residents of their quaint seaside town begin to go missing in the night, they must confront the realities of their opposed situations and decide whether their love, star-crossed or no, is worth the mutual sacrifices. Perhaps the ultimate metamorphoses of Spring actually revolve around their suitability and commitment as prospective lovers, even while a monstrous form lurks beneath the briny surface.