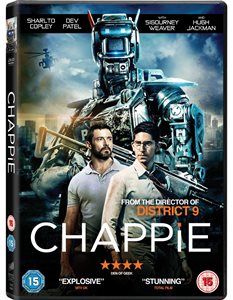 With a hip-hop, cyberpunk aesthetic paying homage to 1980s classics Short Circuit (1986) and RoboCop (1987), by way of the critically derided Tank Girl (1995), Neill Blomkamp’s unorthodox sci-fi Chappie (2015) is an energetic, experimental genre piece that just falls short on delivering the heady concepts it raises. The film opens with newsreels blaring out announcing the existence of an A.I. called “Chappie” before flashing back 18 months to find a crime-ridden Johannesburg on the brink of collapse. In a bid to stem the crime wave, the police have turned to an arms company to supply then with gun-totting droids. So far, the comparisons to Paul Verhoeven’s cyborg cop are obvious. 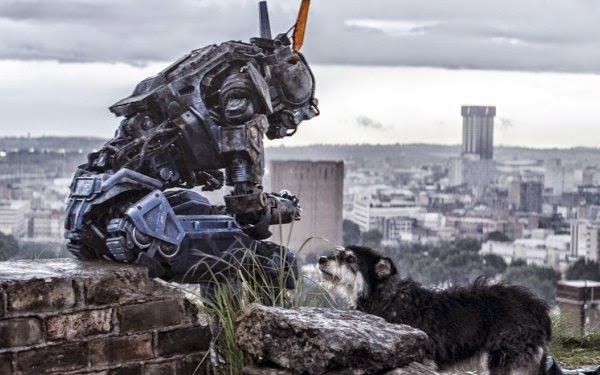 The robot’s inventor Deon (Dev Patel), however, wants to look further afield than just creating mindless drones; he wants to develop A.I. His lofty dream is met with confusion from his suited and booted boss (Alien star Sigourney Weaver), who quips “You just pitched to the CEO of weapons manufacture a robot that can write poetry.” Needless to say, the project is canned, much to the delight of Deon’s rival, armourer and ex-solider Vincent (played by a mullet-sporting Hugh Jackman). Things go from bad to worse when Deon decides to go rogue and run the experiment. Unfortunately, he’s hi-jacked in-transit and forced by a gang of thugs, played by Ninja and Yolandi of Die Antwoord fame as well as Jose Pablo Cantillo, to activate the A.I. so they can use it in a heist.

The plot is a mess and the character’s motivations underdeveloped, but more than this the underlying problem is that Blomkamp never seems sure of which direction he wants to take the film. A.I. and the impact (typically negative) of advanced technologies have been a popular theme in cinema for decades – from Desk Set to Lawnmower Man. In recent years, A.I has had a renaissance in cinema with Her, Transcendence, Ex Machina, and soon in the forthcoming Avengers: Age of Ultron. However, the existence of A.I., and what its existence might do to the world, takes a surprising back burner within the first act. Once activated, Chappie – with his rabbit-like antennae ears – is a endearing character to watch, and is superbly rendered, played by Sharlto Copley via performance capture technology. Chappie is in many ways reminiscent of the bumbling Johnny Five, who from his birth is like a toddler, picking up words he should, and shouldn’t, and mimicking behaviour of Ninja, who teaches him to be “bad-ass”.

The idea of nature vs. nurture seems then to take over from the A.I. concepts, where Ninja shifts from being a gang-banging armed robber to gentle and caring mother figure for Chappie. Yolandi handles the role with conviction, and there are some quirky, yet tender moments such as her cuddling up with Chappie in bed to read him a story, or tell him what makes him special. These moments are bizarre, but are what make the movie shine. There are brief, underdeveloped musings on the soul and the nature of consciousness, again lacking in any real purpose and lack cohesion. Chappie’s education in his dysfunctional family is engaging for a time. The themes of childhood and family are quickly dropped in favour of Jackman’s short-tempered Vincent, who wants to use his ED-209 like robot, dubbed “The Moose”, to smash and bash Chappie and his maker. Despite all of Chappie’s faults, the brazen quality with which it hops, skips and jumps over its ideas, characters, themes and plots somehow holds together, always rife with energy.

This review was originally published to coincide with the film’s UK theatrical release in March 2015.