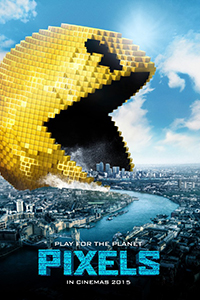 Instead of delivering feel-good gamer nostalgia, Chris Columbus’ big budget spectacle indulges in the worst kind of self-congratulatory 1980s male egotism ad nauseam. Fuelled by a relentlessly upbeat soundtrack that covers Everybody Wants to Rule the World and We Will Rock You (twice), this clumsily reanimated, effects-laden blockbuster adds up to little more than a send-up of retro gimmicks, cheesy celebrity cameos, and casual misogyny. After aliens mistake a NASA space probe’s transmission of ‘Galaga’ for a declaration of intergalactic war, only Brenner (Adam Sandler, Happy Madison‘s favourite man-child), can save the planet from annihilation due to his unique set of hand-eye coordination skills. 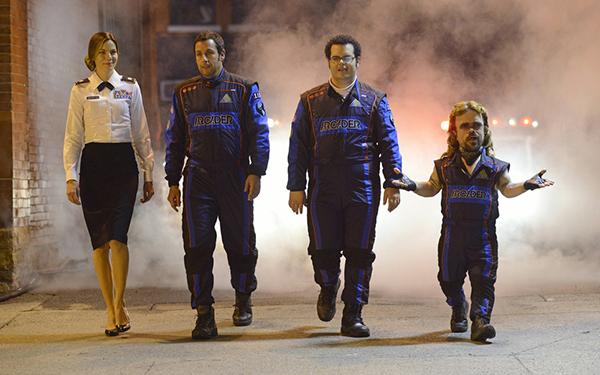 30 years after losing the world arcade championship to Eddie the Fire Blaster (Peter Dinklage) – who speaks like Hulk Hogan, flanked by busty groupies – Brenner is called to duty. Sandler gives a surprisingly weary performance as a home-entertainment installer who is not above calling Lt. Col. Violet Van Patten (Michelle Monaghan) a “snob”, then trying to win her over to validate his manhood. A brief skirmish of one-upmanship culminates with Brenner triumphantly moonwalking into the Oval Office – he also happens to be best friends with frighteningly inept President of the United States (Kevin James), aka Chewy, whose only redeeming value is his passion for Claw.

After an alien attack on the Guam military base, Brenner and Chewy, joined by childhood sidekick Ludlow (Josh Gad), face-off against the likes of Centipede and Donkey Kong in a series of different game interfaces. But the recurrent sight of over-aged nerds in matching outfits armed with light cannons – even against an adorable Pacman munching up the New York City grid – merely proves a case in diminishing returns. Not even the blown-up, blocky graphics of 8-bit avatars through 3D glasses can rescue the film’s somnolent direction and practically non-existent plot. In a universe where Pacman ghosts are reduced to Mini Coopers, the action offers no real visceral sense of jeopardy. And as if the crew wasn’t sufficiently rewarded, a silent, scantily-clad, fantasy heroine (Ashley Benson) is literally referred to as a “trophy” by Ludlow, while Serena Williams is outrageously pimped out to Eddie.

Just in case you missed Van Patton’s own sole function as an object of lust, Chewy points out to the literally speechless First Lady (Jane Krakowski): “She’s a 10.” Never mind the fact that she’s a top-ranking military official. Earlier, a cheating husband swiftly reduces her to a tipsy mess on the floor, sobbing her heart out to Brenner. Despite isolated moments of silly charm – Brenner goads uberjock Navy Seals: “Are you guys soldiers or the cast of Magic Mike?” – Pixels ultimately falls short. Not quite sophisticated enough for parents – who will get the thick-and-fast pop references, but have grown up a bit since then – or their X Box-savvy kids, who will probably be less than impressed by its dated aesthetics, if not blatantly backwards gender politics. On this evidence, maybe the eighties weren’t so great after all.