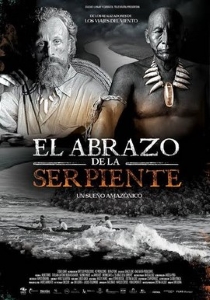 Despite eschewing colour in favour of the rich textures of monochrome, Ciro Guerra’s Embrace of the Serpent (2015) manages to be one of the most vivid depictions of the Amazon committed to celluloid. Shot on sumptuous Super 35, the black and white photography lends itself to the film’s sorrowful ode to a world devastated, but it is the ceaseless teeming life of the soundtrack that transports the audience into the the midst of the rainforest. They’re there to witness the upriver voyages of two western explorers over three decades apart, whose parallel journeys bring into sharp relief the harrowing effect of colonialism on the Amazon and its peoples. 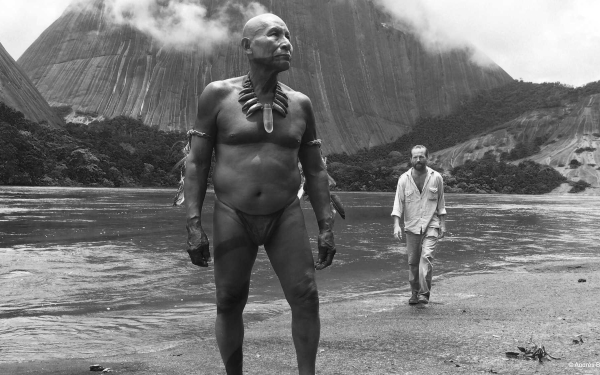 “The river is full of fishes; we cannot possibly end them,” rages an interloping westerner when it is suggested that fish should only be eaten during a certain phase of the surrounding’s natural cycle. This call to listen to nature, to hear the rainforest when it speaks, is at the centre of the film’s philosophy, embodied by the closest thing to a protagonist, Karamakate (Nilbio Torres), whose presence entwines the two complementary narratives. In the early 1900s he accompanies the stricken German ethnographer Theo von Martins (Jan Bijvoet) – along with his native manservant Manduca (Yauenkü Migue) – in search of the rare plant that may save his life.

Forty years later, an elderly Karamakate who seems unable to recall his previous experiences escorts an American botanist, Evans (Brionne Davis), on a similar quest for the same plant. By the time of his meeting with Evans, Karamakate (now played by Antonio Bolivar) considers himself to be a ‘chullachaqui’ – an empty vessel, like a ghost, drifting through the jungle. In this way, he represents the Amazon with regards to its indigenous population; stripped of his power and his soul by the invasions of the colonising settlers. But the term is also used to denote a creature, a much older denizen of the rainforest, who is itching for a fight. As the journeys downriver continue, it is easy to see why either or both readings may be equally valid. The overt oppressions of the white invader are evident in mutilated locals desperate for rubber to appease their tormentors, or a religious commune in which boys are taken from the surrounding locals and taught to abandon their native tongue and name.

When that location is revisited in the later section, the full horrific extent of the psychological and cultural damage. This is where Embrace of the Serpent is at its most blistering – in its scathing indictment of the ravaging of Amazonian culture. This is a canoe ride through colonialism’s rape of the resources and inhabitants; destruction of the environment is the primary concern of the young Karamakate, but the toll taken on the people is equally heavy. The languorous pacing – particularly in the middle section – may lessen the impact on audiences somewhat, and the two-hour runtime seems a little much, but this is important, harrowing and deeply heartfelt lament that deserves to be seen and most definitely heard.