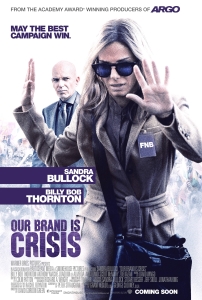 ★★☆☆☆
The inherent drama of political election campaigns have long proved effective oil for the cinematic narrative machine – both inside and outside the Hollywood dream factory. Whilst the cogs are whirring at full steam for David Gordon Green’s latest venture, Our Brand Is Crisis (2015) turns out to be a disappointingly middling affair. Whilst the director’s past few films may not have garnered universal acclaim, they have at the very least been interesting spins on recognisable themes. That’s not really the case on this occasion, where he’s delivered a surprisingly uninspired race for the Bolivian presidency, which makes nice use of location but little of its impressive cast. 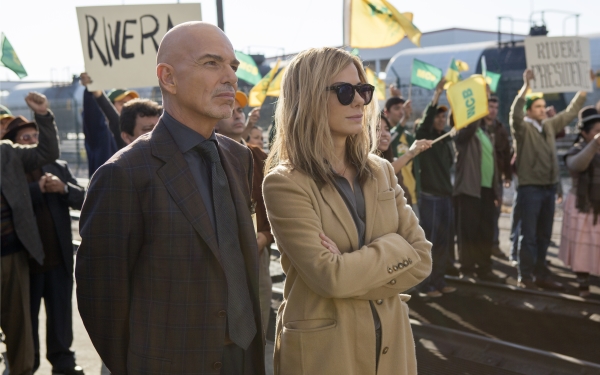 Chief amongst those wastes is Our Brand Is Crisis’ star Sandra Bullock (pictured right), who is eminently watchable as lead character ‘Calamity’ Jane Bodine but who struggles with a screenplay that hardly deserves the complexity its constantly striving to create. Her fluid motivations seem to shift repeatedly and while this may be part of an attempt to convey her inner professional and ethical turmoil, it fails to chime with the way that other characters interact with Bodine. Fortunately there is one exquisite pratfall that she absolutely nails, but otherwise this is very much Bullock on relative autopilot, not unlike her co-stars Ann Dowd, Anthony Mackie, Scoot McNairy and Zoe Kazan.

The one performance that stands out from the crowd is Billy Bob Thornton who gives an enjoyably loathsome turn as the strategist in the opposition camp, Pat Candy. He’s a skin-crawly creep with the best lines, but it’s still hardly a stretch for the actor. Peter Straughan’s screenplay is far less interested in character than it is in the methods adopted to be first across the line – in keeping with the focus of the Rachel Boynton documentary of the same name that inspired this film. This is certainly where Our Brand is Crisis is at its most comfortable, cracking wise and throwing about quotes by Sun Tzu, Machiavelli, Muhammed Ali and Warren Beattie with abandon. At the film’s close, someone asserts that Jane hides behind quotations because she has nothing concrete of her own to say, and it’s hard not to arch your eyebrows in agreement. At least the setting provides some inspiration and Gordon Green, along with regular cinematographer, Tim Orr, gives the film some bustling South American style and a memorable visual verve. Indeed, with George Clooney and Grant Heslov as producers, it’s difficult not to see this as an attempt to combine two of their previous films Argo (2012) and The Ides of March (2011). Regrettably, Our Brand Is Crisis comes off a lot more like the latter, a by-the-numbers campaign drama that lacks the spunk its director might have been expected to bring to the table.