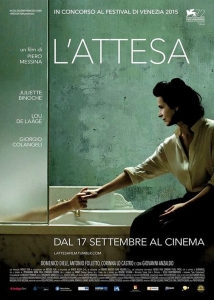 Entering the race for this year’s Golden Lion, Sicilian director Piero Messina’s The Wait (2015) is potentially an impressive twenty-minute short inflated into a shapely but ultimately empty feature, rank with religiosity. A crucifix hangs in an operatic darkness. A woman older than the universe kisses the feet of the effigy and Anna (Juliette Binoche) a grieving mother stands until the urine runs down her leg, such is her grief and devotion. The next evening Jeanne (Lou de Laâge), a young French girl, arrives to spend Easter with her lover, Anna’s son Giuseppe. There is something of the Gothic mystery in her arrival at the large Sicilian Villa twisting through the black rock on the slopes of Mount Etna. 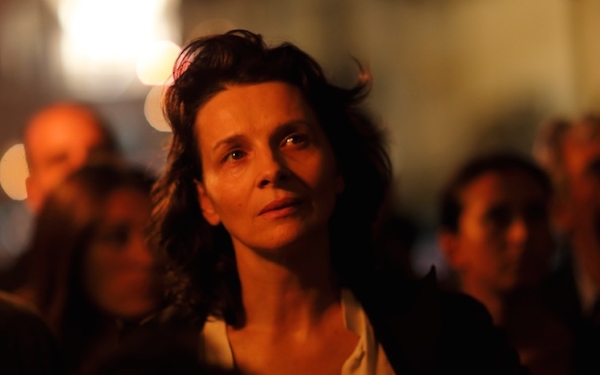 Pietro (Giorgio Colangeli), the old guardian who picks her up from the airport, has the air of an Igor or some other familiar. Giuseppe is absent and when she awakes to find mourners in the house, she fears the worst. However, Anna explains that her brother has recently died and that Giuseppe will return for Easter. Anna maintains the deception through the whole weekend, sending Anna text messages via her son’s phone in a desperate effort to keep her son alive. Her motivation is relatively obvious. Why Pietro or her sister-in-law, or any other of the guests, or any of the locals don’t disabuse Jeanne is less clear and The Wait consistently defies common sense in order to sustain the thin narrative.

It helps that Jeanne herself is relentlessly naïve and soon befriends a pair of local lads (Antonio Folletto and Domenico Diele) while swimming in the lake, who likewise appear to be blissfully ignorant of the recent death in the huge villa. They come back for an implausibly sumptuous meal Anna has prepared and dance to Leonard Cohen – the way the kids do these days. Messina cut his teeth as Paolo Sorrentino’s assistant director and the fingerprints of the master are present in the disciple. The power of an image or a moment trumps The Wait’s actual needs. The title sequence is worthy of a Saul Bass Bond opening as items go through an airport x-ray and passengers float along the moving walkway. A bright pink air mattress is blown by the wind across a villa forecourt and Jeanne goes for cinematic underwater swims. Everything is striking, but being struck quickly becomes annoying. Anna and Jeanne become close and there are moments in their relationship which reach for some genuine human truth. Haunting her son’s room and drinking the tea that he left,

Anna expresses depths of heartbreaking grief that the clichéd religious devotion doesn’t touch on. Binoche is wonderful, but it feels as if the director is so in awe at the luck of having an icon of World Cinema in front of his lens, that he just keeps shooting her emoting. This is one of several films of the festival – The Danish Girl and The Endless River also share this trait – in which people weeping at you is supposed to be moving but it simply isn’t. There is (that horrible word) promise here – de Laâge is fine as Jeanne also – but The Wait’s screenplay by the director, Giacomo Bendotti, Iliaria Macchia and Andrea Paolo Massara (a loose adaptation of a Pirandello play) is too unsubstantial and ultimately a little silly.