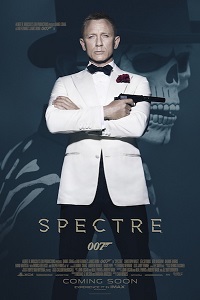 “The dead are alive,” we’re informed at the start of Sam Mendes’ second Bond outing Spectre (2015), and there’s a definite sense that this 24th entry into the franchise is attempting to resurrect ghosts from the past. Sadly, it is far from successful. The action begins gliding through the bustling streets of Mexico City on the Day of the Dead as Bond, once again played by Daniel Craig in what is presumed to be his final turn as 007, navigates crowds decked in myriad skull costumes, like some fantastical danse macabre.

This lavish opening tracking shot, captured in one take by cinematographer Hoyte Van Hoytema, dazzles, promising a spectacular follow-up to 2012’s box office behemoth Skyfall. After a rapid costume change and a brief glimpse of Stephanie Sigman’s Estrella, we see Bond suited and booted as he hops across rooftops on a mission to kill mafia boss Sciarra (Alessandro Cremona). A dizzying helicopter battle knocks the wind from your lungs and Bond acquires a ring bearing a mysterious symbol before the credits roll, backed by Sam Smith’s title track Writing’s on the Wall. Once this opening sucker-punch of a set-piece has concluded we enter much more familiar Bond territory. Like Skyfall, Spectre is loaded with allusions to the previous entries in the franchise, undoubtedly providing much glee for Bond fans. The nods, quips and – by this point terribly familiar – overall formula soon become tiring, however. 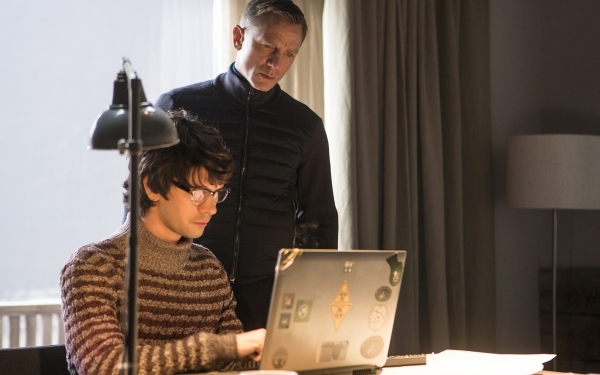 Unlike Skyfall, which explored how such a dinosaur of the secret service could still exist and operate in the modern world, Spectre is more confident about Bond, no doubt bolstered by the success of the previous film which took a staggering $1bn worldwide. Spectre has a level of confidence that dares to return to the tropes of old. There is an a-typical battle of wits between James and his superior M; this time seeing Ralph Fiennes secured as the head of MI6, Mallory, following the death of Judy Dench’s M in the previous outing. Mallory explains how the 00 programme is under threat from a new security initiative, dubbed ‘Nine Eyes’ – a surveillance programme linking the world’s nations, headed up by paper-pusher Denbigh, aka C (Andrew Scott). Mendes – along with screenwriters John Logan, Neal Purvis, Robert Wade and Jez Butterworth – uses the rivalry between C and M as a chance to explore the current zeitgeist of anxiety surrounding surveillance and the secret services that have been a hot topic since Chelsea – formerly Bradley – Manning and latterly Edward Snowden’s high-level intelligence leaks.

Bond is determined to discover the meaning behind the mysterious ring and after a visit to Q-branch, where the returning quartermaster (Ben Whishaw) teases Bond with a new Aston Martin and hands out a single gadget to help him on his missions. In Rome, Bond encounters Sciarra’s wife (Monica Bellucci) who points him towards a gathering of a clandestine organisation, headed by Franz Oberhauser (Christoph Waltz). The settings are lavish; Rome, Morocco and Austria look glorious, with Van Hoytema’s cinematography warranting comparison to Roger Deakins’ marvellous work on the last Bond outing. However, the action is lacklustre, the script bloated with cheap, repetitive gags, that make Craig’s Bond arrogant rather than endearingly cocksure. It diminishes his charm, which is blunted further but Craig’s baffling half-smirks that give the impression of Bond cracking ‘dad’ jokes. After Rome comes Austria and the reappearance of a familiar face, Mr White (Jesper Christensen) and direction to seek out his daughter, Madeleine Swan (Léa Seydoux), who can reveal all about the mysterious organisation. Along the way, Bond is pursued by Dave Bautista’s Mr. Hinx, a hulking hitman with a deadly manicure and a penchant for popping eyes. He’s a combination of Jaws and Oddjob and serves little purpose to the plot other than kick-starting fight sequences
Seydoux is the love interest, declaring drunk that she will kill Bond if he touches her; less than 24 hours later she’s clad in a silk negligee following a near-death experience and off-camera experimentation with Bond’s licence to thrill. What follows comes too close to spoiler territory. Sufficed to say, the majority of the audience won’t be surprised – this outing bears most in common with the predictable and dull-witted Quantum of Solace. There is confidence in returning to a more traditional Bond, but this attempt just feels tired. While Mendes and co. are keen to give audiences what they desire, they have utterly failed to push the envelope on the good work they did last time out. The underwhelming conclusion feels like a high-budget episode of Spooks – distinctly lacking in pace and drama. There’s enough nostalgia in there to reward Bond aficionados, but for those who aren’t enraptured by 007’s antics this is little more than a rehash, desperately lacking the rousing charm of Skyfall, or the slick glamour of Casino Royale. At present, Ian Fleming’s most famous character feels tired, dated and out of touch.
Joe Walsh | @JosephDAWalsh

Most people can’t afford to travel from Mexico City to Rome to Austria within a few days like James Bond, but there are many vacations that are affordable. Like Mexico City, Puerto Peñasco, or Rocky Point, in Sonora has a Day of the Dead festival and is a great location for seaside fun. Furnished Rocky Point Rentals make planning a trip to Mexico easy and affordable.