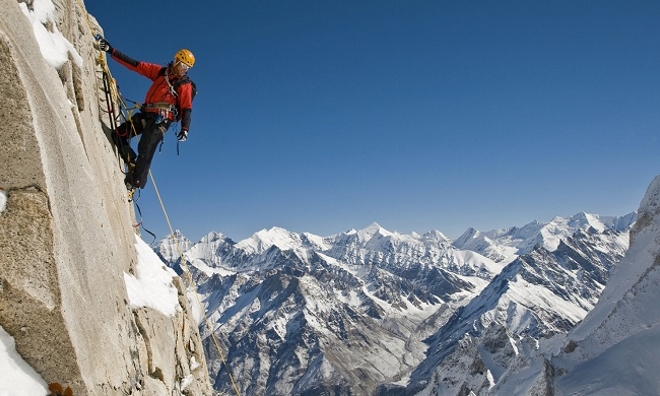 ★★★☆☆
Anyone with a fear of heights should look away now. Jimmy Chin and Elisabeth Chai Vasarhelyi’s Meru is at its dizzying best when the filmmaking duo allow the facts and images of an astonishing feat to speak for themselves. Described by Buddhists as “the centre of the universe,” the knife-edge summit atop the Shark’s Fin of Mount Meru sits over 20,000 feet up in the northernmost reaches of India. The precarious sliver of snowy ground is the pinnacle, both literal and figurative, of the climbing world. Chin, veteran mountaineering partner Conrad Anker and new recruit Renan Ozturk spent years planning, and a number of weeks in the attempted execution, of the impossible.
Like climbing a mountain, reviewing documentaries is a tricky business. Often the information revealed or scenery shown is so staggering that it papers over cracks in presentation. As spectacular as its subject matter may be Meru does fall into this trap. Perhaps in an attempt to broaden the appeal of what would traditionally be a snappily-edited, Red Bull extreme sports video, a lot of time is dedicated to humanising the team’s exploits. More attempts and more failures have occurred scaling the razor-thin Shark’s Fin, says author and mountaineer Jon Krakauer; with a resigned roll of the eyes Anker’s long-suffering wife is forced to accept that her husband will not stop until his goal is reached – even if he dies doing so. Ozturk’s disgruntled other half claims he booked a ticket to return to Meru without consulting her, even in the wake of a near-death skiing accident.
Talking head testimonials do personalise this story but they really only tell us what we already know and don’t plough the inexorable draw of the mountain, the obsession, why these men are so willing to risk it all. The silent bitterness of the opening moments make for grim viewing but clearly underline the extreme danger undertaken here. Wind howls past the camera, a portaledge camp clings to a sheer cliff face like a limpet and three men spend four days confined to this precarious space, battered by an unrelentingly ferocious storm. If at first you don’t succeed, try, try again. As an example of resilience, determination and at times sheer pig-headedness, Meru excels. Where it truly is an unqualified success, however, is its photography and the “don’t look down” moments which will petrify on a big screen. Chin and Ozturk capture the terrifying beauty of life at the top of the world; their vertiginous cinematography almost as impressive a feat as scaling the great blade of rock itself. Palms will sweat, mouths will be dry and lumps will be firmly lodged in throats as – run-of-the-mill doc staples aside – Meru tells a compelling tale.

Meru is in cinemas via ourscreen, on digital download and comes to DVD and Blu-ray from 7 March.